Home » Putting the CAP on the right track 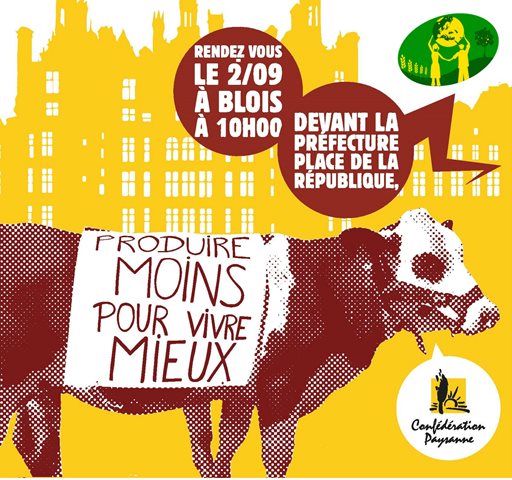 In view of the informal meeting of the Council of Ministers of Agriculture of the European Union to be held on September 2, ECVC with our colleagues from the Confederation Paysanne, will mobilize in Chambort to denounce and raise awareness of the serious crisis that the CAP- adapted to free trade agreements and discarding market regulation instruments- has on producers and on European citizens. ECVC also wants to send a clear message to the ministers of agriculture: we need another agricultural and food policy, one that protects the fundamental rights of our communities and puts the market at the service of the people.

The European Coordination Via Campesina welcomes the initiative of the French Agriculture Minister Stephane Foll of gathering his counterparts at Chambort to informally discuss the future of the Common Agricultural Policy. The meeting will be short, in a Royal venue of dubious symbolism, but it takes place amidst an intense agricultural crisis which we hope will give the ministers the foresight and ambition to profoundly change the CAP in the months to come.

Pork, beef, fruit, cereal, Mediterranean products, almost all sectors are touched by the effects of an agricultural policy that has abandoned the essential tools needed to regulate production, thus prices and the income of producers.

The dairy sector is characteristic of the tragedy suffered by our countryside; with a price below 30 or 25 cents per liter, whereas the cost of production reaches at least 35 cents, day after day, dairy farmers are ceasing their activity in despair; France, Belgium, Spain, Portugal, Italy, Central and Eastern Europe, no country is spared by the disappearance of peasants devastating many rural areas.

The situation is particularly schizophrenic if we consider that the EU prepares to celebrate in Cork, Ireland, 20 years of “rural development”, which is the “second pillar” of a seriously limping CAP.

If it wants to hold on to any legitimacy among citizens disappointed of a Europe at the service of industrial and financial lobbies, future agricultural and food policies will have to take a radical turn towards serving people. A legitimate food and common agricultural policy must meet the needs of people and be structured around basic human rights.

It must ensure the right to food, including that of the poor and marginalized; it must respect the right to income and a decent life for farmers, as well as all the rights held by workers of the agricultural and food sectors, local or migrants. It must ensure a healthy environment for all people today and for future generations and enable the transition of all producers to agro-ecological farming. Trade policies must be consistent with that choice, allowing food sovereignty in Europe and third countries.

This is possible. The CAP budget, which represents nearly 60 billion euros annually, or one-third of EU spending, can be drastically modified in accordance with these objectives and for the purpose of a new redistribution, ensuring solidarity with -and inside of- rural areas. This would also be possible with an efficient CAP that does not hesitate to intervene in market regulation and production by means of a wide range of public instruments that do not involve EU budget expenditures.

ECVC salutes the actions of producers and supports the mobilization of farmers in Europe, such as those in France regarding Lactalis, or Germany against the DMK Group, corporate icons of the aggression and commercial hegemony of multinationals on European policies. These companies, for which milk is a commodity, weigh heavily on the sector’s development, on the expansion and the industrialization of farming. We urge other organizations that are calling for rallies to join us denouncing the causes that have led to this situation and thus reject the elimination of public policy instruments and therefore of WTO agreements, TTIP, CETA, MERCOSUR. It is impossible to defend agricultural exports without destroying farmers.

Thousands of young Europeans are willing to work to feed their fellow citizens and preserve our countryside; policies must take stock of these issues and provide other perspectives than the law of the market and deadly competition. Only stable and remunerative prices, along with acknowledging a profession of great public interest, will be able to give back hope and trust.