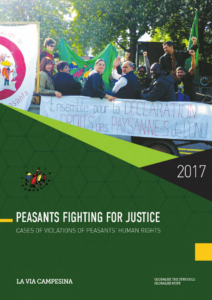 La Via Campesina is a global movement, emerging from the realities of peasant communities of the world. Year after year and all around the world, peasants have been undermined by the advance and upsurge of companies and State’s power and control of their most precious assets: land, water, seeds, biodiversity and nature.

There is an increase of despoilment, privatisation, and growing emphasis on the interests of industry and large-scale investments.

In the light of this situation, La Via Campesina, the global peasant movement advocates for a UN Declaration on the Rights of Peasants and other People Working in Rural Areas. Such a Declaration would enable us to sow the land that protects the lives and livelihood of farmers and improves their recognition as political subjects while granting them the right to use, manage and control natural resources.

Day after day, we walk the path of food sovereignty in our fields and in the global, regional, national and local spaces for governance. We build autonomy and power for women peasants and farmers who face a system that discriminates them in multiple ways and increases the violence towards their bodies and territories. We build rights: rights for peasant men and women, for those who carry out agricultural activities, for the landless, for those who graze and fish and for migrants and seasonal workers forced to work under conditions of extreme employment insecurity and often servitude.

This report is published alongside the People’s Manual for Peasant Rights, which thoroughly reviews the fundamental elements of the Declaration and clarifies what the listed rights consist of, while providing a historical vision and strategic perspective for future work. Both documents represent a joint effort from organisations and the Working Collective on Peasant Rights of La Via Campesina. They are aimed at moving forward in recognising these rights within our movement and with allies and society as a whole. This report citing several cases of rights violations, is the fourth in a similar thread of publications that came out in in 2004, 2005 and 2006 with the goal of introducing the issue into the United Nations Human Rights Council.

This report comes from a premise that in order to build rights, we need to draw attention to the systematic violations and patterns of discrimination that make the largest collective in the world suffer most of the hunger and poverty.

These cases have been compiled by the regions themselves in a unique effort to systematise the violations of the human rights of peasant men and women. Rights are built and also exercised. This is the reason why we call on the States to recognise these rights. We work with the United Nations to adopt a regulatory framework that promotes, protects and defends the rights of peasant men and women and other people working in rural areas. We must also strengthen the organisations’ functioning in order to identify violations every day and learn about mechanisms that strengthen the defence of these rights.

The cases are based on the criteria that help organizations to work on the violations of peasant human rights. First of all, the political, economic and cultural context in which violations took place or the struggle for rights with an analysis of the role played by capital allows organizations to determine the origin and causes of the cases of human rights violations.

Secondly, it reveals the impact of such violations on local communities and shows whether violations are frequent or isolated events, as well as whether victims are organized members of social movements. Third, we must know who violated these rights and to whom the struggle is addressed as well as the role played by institutions. This aspect reveals the legislative and political context and tells us whether these powers are absent as well as the level of justice we can expect from the courts.

Finally, the cases include proposals aimed at improving the respect for human rights as well as specific recommendations on how to carry out reparation work, including the role of States and the importance of a United Nations Declaration on Peasants’ Rights.

The Declaration on the Rights of Peasants and other People Working in Rural Area requires States to urgently adopt the Declaration.

This will depend on our mobilizations and our pressure on States. We are not at the end of the process. We are taking giant steps but the path is as challenging as the field itself. We know that the fruits we reap will be the harvest of our struggles for peasant’s dignity and life!