Home » Promote Peasant Agroecology as an alternative to migration: LVC in Dhaka 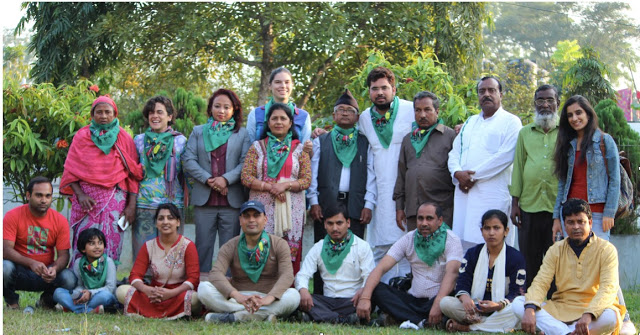 La Via Campesina International Working Collective on Migration and Waged Workers represented the concerns of small farmers, indigenous people, landless workers, women and youth at the People’s Global Action on Migration, Development and Human Rights. The People’s Global Action is a parallel event to the 9th Global Forum on Migration and Development, and took place 5th December to the 8th of December. Hosted by the Bangladesh Agricultural Farm Workers’ Federation (BAFLF) , the group of 31 delegates participated in the PGA process especially on issues connecting migration to climate change and peasant agroecology. Following the PGA, the delegation was hosted on a field visit by BAFLF.

Speaking at the working group, Omoli shared, “Very often, the scant attention on rural agriculture aggravates the distress induced by climate change. The depleting groundwater level in rural Bangladesh is forcing the small farmers to go deeper to look for water sources. In the process, they incur huge debts and place high demands on energy needs.”

The energy crisis in the country in forcing the government to look for quick fix solutions leading to thermal plants coming up in the eco-sensitive areas of Sunderbans. These quick-fix solutions, she alleges, further endanger an already vulnerable region by forcing locals migrate. Asma Begum and Nasrin also highlighted the increasing micro-credit institutions that are coming up in the countryside are further worsening the debt crisis of small farmers.

“The decision to migrate is very often a forced choice, due to the developmental model that is focused only on production and profit. Unless we question this developmental model, and force the GFMD to acknowledge the linkages between migration and the neo-liberal developmental model, we are not going to address the root causes that lead people to flee their home land and communities”, said Nasrin.

Rajbir Singh, a farmer from Bundelkhand region of India, presented the alarming situation of water scarcity and continuous droughts that have forced the region’s farmworkers to migrate to the cities in hordes. He said that for farmers farm labour is increasingly hard to find in the region and very often small farmers turn to farm workers. Many a times, he says, cattle are unattended. The worst affected are women and elders who are left behind in the villages. He cited Bundelkhand as an example of how climate induced migration leads to more exploitation of workers in the cities, where they are left with little bargaining power and are often at the mercy of agents who promise work.

Sarita Bhusal and Bimala Kumari, representing the peasant women in Nepal, re-emphasized the increasing feminization of agriculture in and the additional burden on a woman peasant to manage her fields and home.

Speaking at the forum, Lal Bahadur Biswokarma presented the case of Dalit landless farmers who have yet to benefit from the promise of agrarian reform. He attacked the neo-liberal capitalist model that created the crisis of migration in the first place, while questioning its symbolic attempts to now address the same.

La Via Campesina insisted throughout the PGA that peasant agroecology is a solution to climate change and the need to call upon the nation states who are participating in GFMD to rethink the development model they are pursuing.

Young farmers in the group represented the need to make agriculture more viable for small farmers, particularly the youth by providing fair support price to their produce and by investing in rural infrastructure. Gaurav Tikait, Dharmendra Jumar (of BKU) and Pramesh of ANPFA made presentations that asked for implementation of the agrarian reform and increased investment in rural infrastructure that will encourage youth to take up farm and non-farm labour in their communities and country side.

“What GFMD is trying to do is trying to patch up a wound, but not necessarily looking at the wound as a symptom of a larger crisis. Migration and the human rights abuse that is blatantly common needs redress. But at the same time, concrete steps must be taken to arrest migration in the first place and encourage people to remain back and work on their land. Instead, what we are seeing is the governments promoting chemical intensive farming and GM crops more than ever, which threatens to destroy the soil and small farms – leading people to quit agriculture and migrate”, said Pramesh.

“We need to look at progressive steps taken by governments in parts of the world and encourage member states to scale it up. Sikkim, Kerala are states in India that are actively promoting 100% organic farming. We have schemes in India like Rural Employment Guarantee that encourages people to take up development work in their own villages in non-agricultural season. These efforts need to be replicated at a larger scale,” added Dharmendra Kumar of BKU.

On the 8th, the visiting delegation of La Via Campesina met with the agricultural workers of Bangladesh Rice Research Institute and stood in solidarity with their on-going struggle to bring about wage parity, gender equality in the farms and their continued demand for regularization of farm work. La Via Campesina delegates also passed on messages of global solidarity to the farm workers.

The team also met up with Mr. Biswas, the ex-Director of Bangladesh Rice Research Institute, where he presented to them the massive stride that Bangladesh has made in bringing about self-sufficiency in rice. The team also discussed with him the concern of peasants and small farmers worldwide at the appropriation of agricultural research by large corporations with vested interests and the decreasing investments made in transparent public research by various governments. 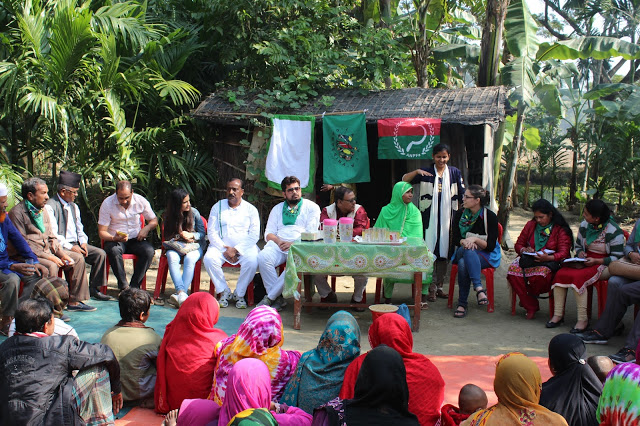 On the 9th of December, the visiting delegates met up with the women farmers of NWFA, an affiliate of BAFLF in the village of Chambarbazil, Fulbariya. One of the local leaders of NWFA, explained to the visiting delegates the steps taken by communities to practice ecological agriculture and their campaigns against industry seeds. The village of Chambarbazil, with an average holding of less than 1 acre, is following the principle of food sovereignty where each family is producing and providing for the community in a sustainable way food that is local and suitable to their culture and climate. The focus they say is not on production but on the quality of what they produce. Rima Akthar, one of local leaders demonstrated to the visiting delegates “Maria Model” of grain selection, a traditional model that communities rely on, to separate good yielding paddy grain from the harvest. They also demonstrated ways in which the selected seeds are preserved in essence of jamun leaves, for the next planting season.