For real alternatives to preserve environmental balances and recognise climate justice, For a fair and sustainable future for all peoples 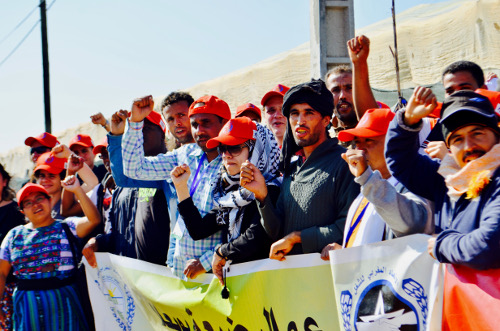 (Marrakech, November 17, 2016) We, the democratic and progressive social movements and organisations who struggle against the continuous destruction of the environment, closely followed the progress of the 22nd session of the conference of the parties (cop 22) held in Marrakech from 7 to 18 November whose organisers consider to be a ‘working conference’ or even ‘a conference for agriculture’. Having closely monitored the preparatory process of this summit and taking into consideration the context in which it is taking place, therefore, we have issued the following declaration:

Therefore, we, the democratic and social movements and organisations signing this declaration, consider that the implementation of those alternatives as well as other solutions aiming at putting an end to the greedy dominating capitalist logic, can become true only by united international and national struggles which make the power balance in favour of the peoples.

Therefore, we call upon all forces struggling against the destruction of the environment and against all forms of imperialist domination to build and international united front against this dominance and its implications on all levels as well as its mechanisms of financial, political and economic control over the international decision making as well as the fate of the peoples. A front that fights for the implementation of real solutions and alternatives which will establish a world free from carbon trade, free from poverty and exploitation, a world of fair and sustainable development.

Long live the peoples united, in solidarity and in struggle for human emancipation