Watch all the videos on  http://wsftv.net 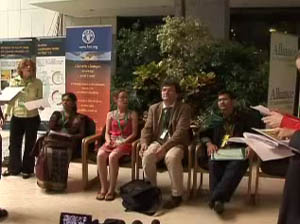 International representatives of small farmers, fisherfolks, indigenous peoples, pastoralists and Non Governmental Organisations (NGO) have expressed their disappointment with the poor outcome of the High Level Conference on World Food Security in Rome. “The final declaration will not fill any plate. The recommendations for more liberalisation would lead to more violations of the right to food”, criticised Maryam Rahmanian from the Iranian organisation CENESTA. During the official conference, the social movements held their own Forum “Terra Preta” to voice their demands to realize food sovereignty and the right to food of the millions of hungry people.

“The claims of social movements for more protection and support for sustainable and small scale food producers, for comprehensive Land and Agrarian Reforms and concrete measures against financial speculation have been totally ignored by the governments”, criticized Herman Kumara, World Forum of Fisher Peoples, Sri Lanka. “It is disappointing, that the governments still do not recognize that the present food crisis is the result of decades of structural adjustment that have systematically violated the right to food”, added Flavio Valente from FIAN International. “This is a step back. In 2004, all FAO member states adopted the guidelines for the right to food.”

“The civil society organisations are alarmed about the recommendations of the new UN-Task Force on the Food Crisis composed of UN-Agencies, the World Bank and the International Monetary Fund (IMF). The Task Force established by the UN-Secretary General Ban Ki-moon has recommended further market opening in the south, food imports subsidized with development aid and a New Green Revolution. “These solutions proposed by Ban Ki-moon would seriously undermine the food sovereignty in the global south. The proposed plan of action is not the recipe against hunger it claims to be”, said Maryam Rahmanian. “We are very concerned that this plan of action will not be presented to governments for discussions, but is meant just to reflect the consensus between UN and Bretton Woods agencies. We fear that this initiative might further undermine democracy in international food policies.”

“It is a shame that some governments do not prevent transnational seed, grain and food processing companies from using the food crisis to increase profits for transnational seed and grain companies”, concluded Dena Hoff, National Family Farm Coalition and Via Campesina, USA. “In the first quarter of 2008, profits of Monsanto have already shot up by 108 per cent, while Cargill registered profit increases of 86 per cent. A new Green Revolution and more food aid would help these companies, but do not offer any solutions for the poor and hungry.” Diwirgai Martinez, Movimiento de la Juventud Kuma, Panama, adds: “Transnational companies have been given more space than ever in an FAO conference this time, while indigenous peoples, pastoralists, small farmers and fisherfolk have been marginalised more than ever.” In the final declaration of “Terra Preta” and the statement “No more failures as usual” signed by 900 organisations, civil society organisations have made very concrete proposals on how to combat hunger. “Heads of States should not only speak about farmers but rather listen to what they propose”, concludes Akylbek Rakaev, Kyrgiz Sheep Breeders Association