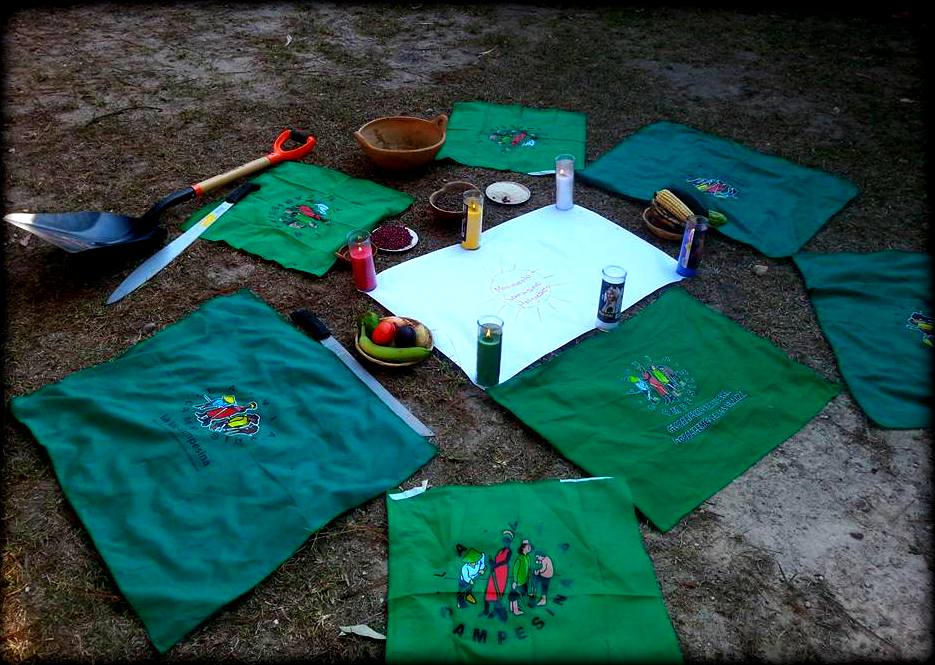 (Comayagua, March 16th, 2016) We, the organisations belonging to La Via Campesina Honduras – The National Office of Rural Workers (CNTC); The National Association of Honduran Peasants (ANACH); The Council for the Integral Development of Women Peasants (CODIMCA); The National Peasant, Indigenous, and Afro-descendant Youth Front (FRENAJUC); and the regional representatives of the Association for the Development of Honduras (ADROH) from Gracias, Lempira; Opatoro and Márcala, La Paz; Colomoncagua, and Intibucá, meeting together in the municipality of Siguatepeque, Comayagua – responding to the very serious social and political crisis affecting women and men peasants, indigenous people, the Garifuna people, and the popular movement throughout the country, strongly condemn:

1. The state policy of neglecting and fragmenting small-scale peasant production.

2. The extreme poverty in rural areas (more than 3 million peasants are suffering from hunger) with poverty levels as high as 70% of the population, of whom 54% are in extreme poverty.

3. The violent evictions taking place on orders of the Courts and the National Police and serving the interests of the power elite and landowners.

4. The imprisonment of more than 5,000 peasants, including 1,700 peasant women, and the assassination of over 140 women and men peasants in conflicts involving land tenure or the defence of territory.

5. The new Criminal Code bill, which we strongly oppose – both because the peasant movement was not consulted and it criminalises the peasant struggle for land as well as all social movement demands.

6. The negative effects of climate change on production, productivity and food sovereignty. These are so severe that, as has never happened before in the history of Honduras, we now have to import corn, beans, rice, vegetables, meat, eggs, and other foods.

7. The total lack of interest shown by the Executive and the Parliament in discussing or passing the proposed bill for a Comprehensive Agrarian Reform with Gender Equity for Food Sovereignty and Rural Development. The purpose of the bill is to create a new, equitable, and fair legal framework for the nonviolent resolution of the country’s agrarian problems.

8. The very worrisome levels of breakdown of state institutions. The Executive, Judicial, and Legislative branches, the Supreme Court, and the Office of the Public Prosecutor have all been linked to acts of corruption. These government bodies have chosen a public policy of open repression against peasants, human rights defenders, and social commentators like the journalist David Romero Ellner, to whom the Honduran state has given a ten-year prison sentence for six defamation offenses. Similarly, the fire sale of our national sovereignty, with the creation of Economic Development Zones (ZEDE), has led to the large-scale displacement of rural families.

9. The persecution and assassination of persons engaged in struggles to defend land and territory. This includes the assassinations of Margarita Murillo, Berta Cáceres, and Nelson Noé García, among other sisters and brothers. The arrest without warrant of Juan Angel Flores, the president of the Unified Peasant Movement of the Aguan (MUCA), and that of human rights defender and member of the Permanent Human Rights Observatory of the Aguan, Orbelina Flores Hernández.

10. The political persecution of the General Coordinator of La Via Campesina Honduras, Rafael Alegría, and other peasant leaders at the national, regional, and local levels, as well as the stalking of and attacks against La Via Campesina offices – a total of 6 incidents since the 2009 coup. We are very concerned by the attack on our employee Cristian Mauricio Alegría, who was shot in his left hand in front of La Via Campesina premises in the Colonia Alameda in Tegucigalpa, on March 15th of this year.

For these and other reasons, we, the progressive Honduran peasant movement belonging to La Via Campesina, are making the following demands:

1.    That the Parliament immediately discuss and pass the Comprehensive Agrarian Reform with Gender Equity for Food Sovereignty and Rural Development Bill, which was presented to it on April 9th, 2014.

2.    The immediate and unconditional release of the more than 5,000 peasants who are on trial for asserting their right to land and defending their territory.

3.    As a Peasant Movement, we are joining the Popular Honduran Articulation “Berta Cáceres Lives On” (Articulación Popular Hondureña “Berta Cáceres Vive”) in demanding that the political assassination of our sister Berta Cáceres be clarified. We are calling for the immediate withdrawal of DESA-Agua Zarca from the sacred waters of the Gualcarque River; this also applies to the international bodies that are supporting these death projects.

4.    We are proposing a Peasant-Indigenous-Garifuna Alliance for the defence of land and territory, and we are calling for a National mobilisation.

5.    We are in complete solidarity with the journalist David Romero, and we demand that the government provide a just and peaceful solution to this case. The Honduran people will not permit more attacks against freedom of expression and the reporting of corruption in our country.

6.    We call upon the national and international community to speak out in defence of life and of Human Rights in our country, and to condemn the state policy of criminalizing and suppressing social struggles.