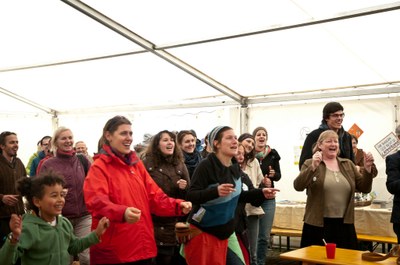 The food sovereignty movement is, in itself, a process of knowledge co-creation. Ludwig Rumetshofer, a young farmer from Austria, and Sylvia Kay, a Netherlands-based researcher invite us to participate in the second Nyéléni Europe Forum for Food Sovereignty in October 2016, in Romania.

Between the 26th and 30th of October in Cluj Napoca, Romania, the second Nyéléni Europe Forum for Food Sovereignty will be held. Drawing together between 700 – 1000 older and younger participants from 42 countries throughout wider Europe, it will serve as a celebration of the full spectrum of the food sovereignty movement comprising peasants and small farmers, fishers, pastoralists, shepherds, indigenous peoples, trade unions, consumers groups, NGOs, local authorities, researchers and many others.

The richness and diversity of the movement shows how increasing numbers of people, organisations and networks are coalescing around the shared language of food sovereignty and agroecology. It is also testament to the vast knowledge that is being co-created by these groups on how to organise food and agricultural systems that work both for people and the environment. It is crucial that those who care for, work on, live on the land and produce plentiful and healthy food are at the centre of that system.

In contrast to the assumption that knowledge trickles down from above, the global Nyéléni movement starts from the grassroots level. We look at how knowledge can be built from the bottom-up, through exchanges between people with different backgrounds and experiences, and can contribute towards shared strategies for building a more food sovereign Europe. The creativity and energy of young people is key in this process. Without shying away from the contradictions, tensions and challenges that such a project brings with it, the Nyéléni process acts as a safe and inclusive space for the exchange of good practices, skills and experiences.

These kinds of spaces are constantly under threat by those who wish to practice a narrow, elitist form of knowledge creation. There are constant efforts to co-opt the core concepts of food sovereignty activists, such as the dangerous mingling between agroecology and climate smart agriculture or sustainable intensification. Under the mantra of ‘resist, build and transform’, the global Nyéléni movement thus seeks to put forward both defensive and proactive strategies for furthering food sovereignty based on horizontal knowledge sharing and creation. We believe that such a democratising approach to knowledge is essential to making the vision of food sovereignty a reality, in Europe and beyond. We warmly invite you to become a part of this exciting process.

Ludwig Rumetshofer (31) is a farmer and a member of ÖBV- Via Campesina Austria. Sylvia Kay (29) is a researcher with the Transnational Institute in the Netherlands. They are part of the steering committee for the Nyéléni Europe Forum in October 2016. For more information: info@nyelenieurope.net .