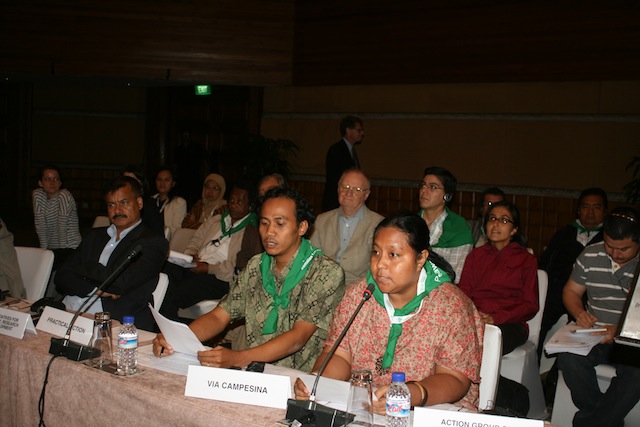 We want to thank the Secretary. I am an Indonesian peasant. You cannot hear my voice, because I’m speaking in my own language. This is my interpreter. It’s unfortunate that the Treaty does not have the means to respect the language spoken in the country in which it meets.

I am speaking on behalf of Via Campesina and the entire group of Civil Society Organizations.

At the second meeting of the Governing Body, civil society organizations suggested that it might be more realistic to suspend the treaty than to continue to work without adequate resources. At the third meeting we remained optimistic and pressed for a program that assumed that governments who ratified the treaty would take the responsibility to make it work. Now, we expect them to do this.

The purpose of this treaty is to promote the conservation, sustainable use and exchange of genetic resources in order to feed present and future generations and to respond to issues such as climate change. The treaty also recognizes the historic and on-going importance of farmers in meeting these goals, and describes elements of Farmers Rights.

Where are we now?

There has been some progress.  Governments are increasingly aware of the importance of plant genetic diversity. We’ve seen a substantial increase in the number of plant species going into collections. There has been a massive increase in the involvement of peasant and civil society organizations in the coordination of on-farm conservation.

But the news is not all good.

Corporate concentration in the seed industry has grown substantially. In 2004 the world’s 10 largest seed companies controlled 50% of global commercial seed sales.  Today, they control 73% of these sales.

As we speak, governments still can’t agree either on a compliance mechanism or on a credible funding arrangement. Some hope that multinational seed companies will voluntarily donate “something”. But wherever corporate funding is directed under the treaty, it makes the treaty dependent on the funders.

There are now at least 261 multi-genome patent applications that threaten to monopolize large strands of DNA common to virtually every known agricultural species. 77% of these claims are being made by 6 companies.

When the treaty came into force, it took 13 years and $3 billion to map one genome. Today, it takes 10 days and $5000. Within two years it will take only 15 minutes. Once mapped, it will become a digital sequence that biologists can use, no longer relying on germplasm. This technology could fundamentally decrease interest in both gene banks and biological diversity.

This is an extremely gloomy picture but we have not lost hope. We are looking for a sign of real change. We know that the people in this room share our passion for seeds and for the treaty. We know the Secretariat is doing its best. But without a clear signal from this meeting, we who wish to conserve and exchange plant genetic diversity may have to look elsewhere.

Thank you, Madam Chair, I will give you the entire text of this declaration.