Home » Peasants’ Union (SPI) calls upon Indonesian government to reject WTO and FTAs, after WTO panel rules in favor of US and NZ.

JAKARTA: In December 2016, a WTO panel reviewing the trade restrictions placed by the Indonesian government on horticultural products, animals and animal products, have passed a ruling in favor of the complainants United States and New Zealand, thus removing the trade barrier set up by Indonesia to defend its peasants from cheap imports.

Denouncing the ruling, Henry Saragih, General Chairperson of Indonesian Peasant’s Union and member of ICC (International Coordination Committee) of  La Via Campesina, has warned that this would hamper the efforts of the Indonesian government to strengthen and develop self-sufficiency in food and meat production.

The farmers’ movement in Indonesia see this as a clear instance of WTO imposing unequal trade regime onto the peasants of the developing world. Cheap import of potatoes, which touched 18.674 tons in the first nine months of 2016 (source: Central Statistics Agency), has meant that local potato farmers in Indonesia are forced to sell in distress often at price lower than their actual costs.

“Ever since Indonesia became a member of WTO in 1993, its protection policies were under scrutiny at the WTO. This ruling will eventually wipe out small farmers and peasants in the country, allowing for massive imports of fruits, vegetables and animal products”, said Henry. 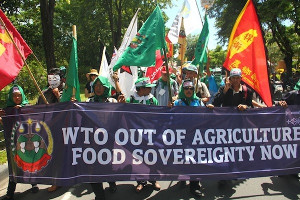 The free trade regime under WTO has devastated the local farmers. Cheap imports of Potato from China and Pakistan had forced the peasants of Central Java and Jakarta to sell at lower than cost price. Over 3000 peasants had held a protest in December demanding the government to take note and impose adequate import barriers.

In a statement released to the national media, SPI has charted out five reasons why Indonesia should reject WTO.

“It is high time that Indonesian government rejected WTO and the Free Trade Regime that threatens its peasants. Along with it, important thing to be conducted is enhance cooperation among peasant organizations in one state with the other, supported by each government in educating, training and transferring agricultural technology so that those states can achieve self-sufficiency in food production and bring about food sovereignty”, added Henry.