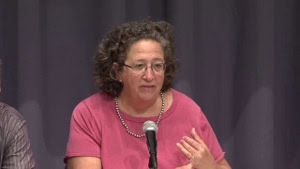 Almost everyone in the country involved with family farmer issues knew Kathy Ozer. We also knew that she had been sick for a while and thought she was getting better. On January 22, the cancer – non-Hodgkin’s lymphoma – finally took her from us. She was 58 years old.

Reflecting upon this loss, however, we state emphatically that her legacy and contributions are immense. Her commitment to establish a better and healthy life in America’s rural communities, both socially and economically, will continue to resonate throughout the country and the world.

The National Family Farm Coalition (NFFC) was created in 1986, and in the early 1990’s Kathy Ozer became Executive Director, a position she held for 24 years. The coalition has 25 member organizations and Kathy learned from and advocated for them all. She worked hard to understand their needs and aspirations to develop fair and just agricultural policies to advance sustainable agriculture and build sustainable rural communities.

Kathy’s husband David Battey supported her role in the coalition and was always there for her. He ferried food and visiting members to annual board meetings and attended other local and national events with Kathy, including many Farm Aid concerts. The NFFC  is very grateful that he has expressed interest in maintaining this longtime relationship.

The NFFC headquarters is in the country’s capital city – Washington, DC – which has been a blessing in countless ways. Kathy’s longtime residency there, combined with her penchant for details and profound expertise in understanding the policy process, made her an effective and respected family farm advocate in both the halls of congress and the United States Department of agriculture (USDA).

Even before becoming NFFC’s Executive Director, Kathy helped to draft and advocate for the Agriculture Credit Act of 1987. This act of Congress allowed many farmers to renegotiate their loans and to receive other services that helped them stay on the land.

Kathy took a stand against NAFTA years before many of today’s politicians understood or knew what NAFTA was. She knew that, regarding agriculture, it was created to benefit large corporate agribusiness and would have a dramatically adverse effect on small farmers in the United States and Mexico. She worked hard to educate farmers and the public about the disaster NAFTA would cause and ways to lessen its impact on family farmers.

One of her most important legacies is her stance against discrimination in agriculture.

Kathy helped family farmers in so many ways, but her interests lay beyond policy development, organizing meetings and lobbying Congress and USDA. Kathy reached out to diverse communities by race and culture in rural America, and brought them together. She listened to them to learn about the compelling and often disturbing issues of racial disparity that also negatively affected US farm policies. She fought against this reality in her advocacy and policy work. In spite of her brilliance, or possibly because of it, she was humble and she listened even when she didn’t agree.

In the lawsuits that Black, Native American, Latino and Women farmers filed against the USDA – because of long standing discrimination – Kathy was always there as a resource and voice of support.

She helped coordinate the historic 1992 demonstration on the steps of the Capitol Building and marched with Black farmers to the front of the USDA to demand that Congress fund the Minority Farmers Rights Act. This act became the first federally funded bill to assist minority farmers, and is now known as Section 2501 of the Farm Bill. Kathy was an expert on the Farm Bill process and tirelessly worked to ensure that the concerns of family farmers were represented in every Farm Bill since the early 1990’s.

Embodied in Kathy was the knowledge of the history of the agriculture movement from the 1980s to the present. Like no other, she knew its details, its dynamics, its ins and its outs, along with the key players.

Her detailed knowledge and rationale for and about policies left many of us breathless, but Kathy was able to explain it in ways that made our work easier and our commitment greater. The complexities emanated from her with an impressive, astute and rare ease. We always knew she had studied the issues to retain the components and rationale to share with us.

Kathy didn’t just talk and study and explain. She worked! She organized! She advocated for those in need, and while we will feel her loss for some time, we are blessed she came our way. Her work will not be in vain. It will be on-going. She taught us well.

A memorial service will be held for Kathy at 3PM on February 11 at Sidwell Friends School in Washington. Member group Northwest Atlantic Marine Alliance will celebrate Kathy’s life and legacy in Boston on February 17; info and tickets at https://www.eventbrite.com/e/rock-the-boat-for-kathy-ozer-tickets-31474848118. Help continue Kathy’s work at NFFC at https://donatenow.networkforgood.org/kathyozerfund.

Note:  We are grateful to NFFC board secretary Margot McMillen along with agriculture advocates Heather Gray and  Jerry Pennick, formerly of the Federation of Southern Cooperatives/Land Assistance Fund, for their input in writing this statement. We also appreciate the numerous messages from advocates throughout the country.

This article has been republished from the website of National Family Farm Coalition and has only been edited for its headline.