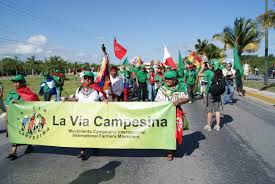 (October 29, 2013, Washington) In the light of the continuous violations of the human rights in Latin America’s rural sector, the Coordinadora Latinoamericana de Organizaciones del Campo, CLOC – Vía Campesina, is going to present in an audience before the Inter-American Court of Human Rights, CIDH, a report on the situation of the human, social and cultural rights in the peasant communities in Latin America and the Caribbean.

This report intends to link the research and monitoring processes at continental level, and denounce the issues that take place in the peasantry’s context. The aim is to look into the consolidation process or vulnerability of the peasants’ rights before this institution of the Organization of American States, OAS.

The audience takes place on October 29th, 2013 during the 149th period of sessions at the CIDH, which is based in Washington, DC. The main points of the report are: The peasantry as a subject of economic, social and cultural rights; the obstacles to the fulfillment of the rights to food and territory and how they impact on the rural population, especially women and defenders of human rights, this in relation to the criminalization of social protest.

For the preparation of this document, CLOC had the support of Centro de Estudios Legales y Sociales, CELS, an important Argentine institution, which focus on the defense of the human rights. It should be noted that CLOC is a space for networking at continental level with 20 years of continuous commitment to the peasants’ struggle. It represents workers, indigenous and black communities in the whole of Latin America and the Caribbean.

The report includes statistical facts that reveal the consequences of the neo-liberal politics and the model of industrial agricultural production, and how they have an impact on the peasantry’s human rights. It highlights among other facts:

The presentation will be given by representatives of the CLOC-Vía Campesina and CELS. This audience will be broadcasted live on the UN web channel: http://webtv.un.org/