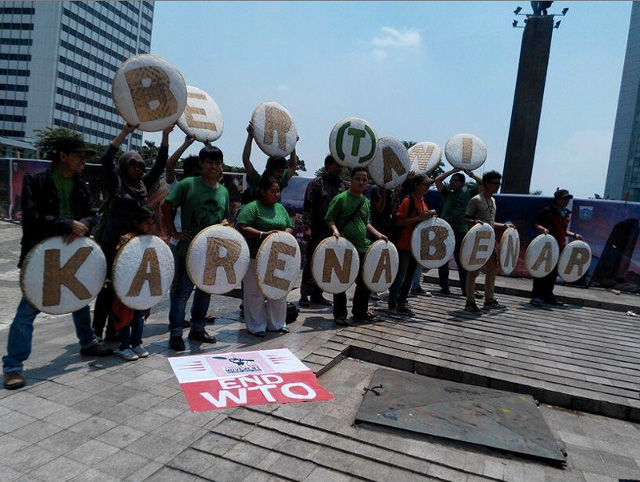 Achmad Ya’kub from SPI National Department of Strategic Studies said that this year’s World Food Day was marked with a fairly deep concern at the national agricultural. According to him, government policies that put corporations as the main actor in all agricultural sectors,  making the role of small farmers increasingly marginalized .

“It means our government does not care at all for small farmers in Indonesia. Though small farmers are food producers and the guardian of our national food sovereignty, ” said Ya’kub in Jakarta ( 16/10 ).

Therefore, according to Ya’kub , agrarian reform is the fundamental thing that must be implemented according to the mandate os Basic Agrarian Law 1960 and small farmers have certainty to manage and work a minimum of 2 hectares of land as mandated by Law 19/2013 on the Protection and Empowerment of Farmers.

Meanwhile, representatives of YFM Syaiful Munir said that at present young generation in Indonesia is getting ” lazy ” to farm . In 2004 , National Statistics Body said there are 40.61 million people aged 15 years and over who worked in agriculture or 43.33 percent of the total Indonesian population . Yet in 2013 , the number of productive working age population in the agricultural sector has dwindled to 39.96 million or 35.05 percent . Yet more than 50 percent over the age of 40 years. Fact, the largest percentage by age group aged over 60 years ( 12.33 % ) .

” There are several factors why young people are lazy to farm. The-no-concern of the government to promote the agricultural sector is one of them . In  2013 budget , the government only allocates Rp 16.42 trillion for strengthening food security. Figure is smaller than the budget allocation field of state security Rp. 81.8 trillion, and personnel expenditure of Rp . 241.1 trillion. Seeing the budget share above, we can conclude that the government has not put agriculture as a priority, ” he said .