Home » Peasants’ Right to Seeds: A Solution to the Food, Climate and Biodiversity Crise 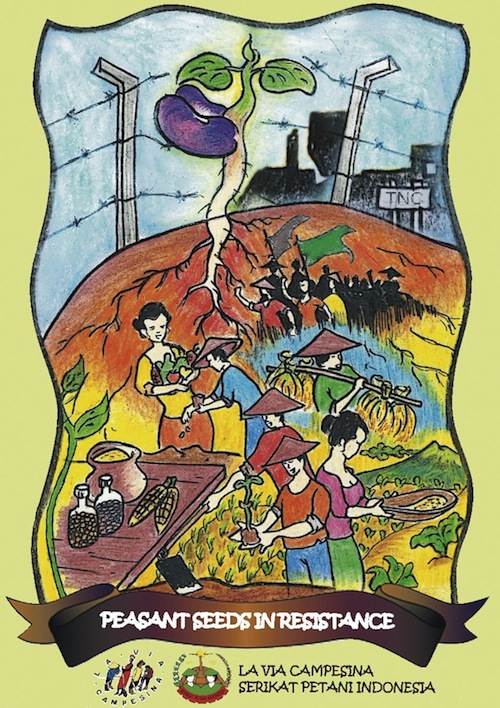 (Jakarta, 3 March 2011) Seed farmers from all over the world, members of La Via Campesina, a global peasants’ movement consisting of 150 member organizations in 70 countries and representing over 200 million peasants and rural workers, will participate in the Fourth Regular Session of the Governing Body of the International Treaty on Plant Genetic Resources for Food and Agriculture (GB4ITPGFRA) that will be held in Nusa Dua, Bali, on 14-18 March 2011. During a series of meetings, seminars and events, they will represent seed farmers from all over the world who are the backbone of food production and the main creators and defenders of biodiversity.

A Ministerial Meeting on Biodiversity, Climate Change and Food Security will be held on March 11. In response to this meeting, the Indonesia Peasant Union SPI and La Via Campesina declare that large-scale industrial agriculture and monoculture production are the root cause of today’s biodiversity, food and climate crises. If we continue with “business as usual”, hunger will increase and peasants will be further marginalized and impoverished. The farmers’ movement demands a radical change in direction in the current agricultural free-market policies.

The experience of small peasants around the world shows that agro-ecological farming and local food markets are the most powerful answer to the current multiple crises. Agro-ecological farming has proven to be very adaptive to the impact of climate change. It captures greenhouse gases in the soil and consumes far less fuel than industrial agriculture, which is a large contributor to climate change. Furthermore, agro-ecological farming guarantees the food production for peasant families and can feed urban as well as rural communities. Regarding genetic resources, small peasants have the capacity to develop new varieties that are more pest resistant and better adapted to the changing climate.

Seeds farmers from Madagascar, France, India, Mexico, El Salvador, Chile, Thailand and Indonesia are available for interviews from March 7 to 18.

Appointments with the media during the Seed Treaty Meeting