It is cruelly ironical. Less than 72 hours after President Joko Widodo’s orders to implement the agrarian reform through land redistribution as a step to address economic disparity and inequality, peasant families of Mekar Jaya Village in Langkat District of North Sumatera Province in Indonesia were in for a rude shock.

Langkat Nusantara Kepong Ltd (LNK) a Malaysian firm with interests in palm oil plantations, did exactly the opposite by evicting these families from their own lands and razing their houses to the ground. 554 hectares of land have been forcefully grabbed from peasants by this Corporation, in a series of attempts made since the 18th of November 2016.

In the latest of those actions, carried out on Monday the 27th of March, seventy houses have been razed down to the ground.

The affected peasant families, who are members of the Indonesian Peasants’ Union (SPI), have so far been putting up a brave fight. But with nowhere to stay and their houses gone, the distress and despair is strikingly evident. 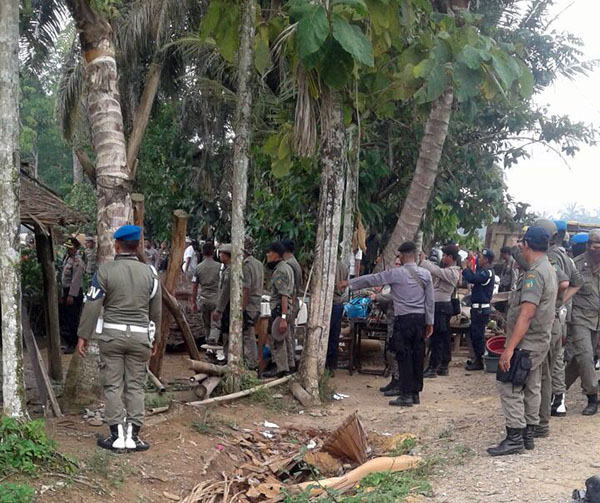 General Secretary of the Central Board (DPP) of SPI, Agus Ruli Ardiansyah said that over a thousand personnel from the police and fire department, descended with heavy machineries to carry out the eviction on Monday.

Visibly agitated, he spoke at a press conference in Jakarta on the morning of the 28th,

“We denounce LNK. It’s actions certainly violate the orders of President Jokowi to immediately implement agrarian reform and land redistribution to address the economic disparity, because Mekar Jaya has previously been listed as a hometown of agrarian reform. 70 houses were destroyed. 360 families have nowhere to stay any longer,”

“What PT-LNK did will increase rural poverty. With its latest actions, the firm has curtailed peasants’ access to livelihood. It is a direct violation of the instructions of President Jokowi to accelerate the agrarian reform. He had re-emphasized it at Mandailing Natal, on March 25, 2017, ” Agus Ruli added.

Zubaidah, Chairperson of SPI North Sumatra Region gives a brief history of the region and recalls 1952, when people of Paya Redas and Paya Kasih earmarked nearly 1,000 hectares of land for paddy cultivation.

“It resulted in the creation of a settlement called Paya Redas, with TK Abdul Hamit as their village head from 1954 till 1964. In the 1970’s trouble started when the company PTP II/PTPN II forcefully evicted peasants from nearly 500 hectares of land. Since then, up till now families in the region have been facing these threats periodically.”, says Zubaidah.

LNK, the firm that carried out Monday’s eviction attack, is a joint venture of PTPN II and Kuala Lumpur Kepong Plantation Holdings Ltd. The Malaysian partner holds 60% of the stake in LNK. Its efforts to evict peasants from the lands which were occupied and managed over the years and over several generations, have been gathering steam lately.

“PT LNK claimed that these peasants who have been living on this land are tenants who come from outside the area. On the contrary, we are the true owners of this land and these houses. We are the descendants and direct heirs of those who have lived here for generations, “said Zubaidah.

At a meeting of all-affected-parties held on the 30th of March, Zubaidah made a presentation explaining the context and the current situation to the House of Representatives of North Sumatra (DPRD). Chairman of DPRD North Sumatra, F.L. Fernando Simanjuntak has ordered LNK and PTPN II to treat the community respectfully and rightfully.

“We are from SPI of North Sumatra, with representatives of SPI from Mekar Jaya village here to meet the Commission A DPRD North Sumatra.”

“Commission A, represented by Fernando Simanjuntak and Sarma Hutajulu as Chairman and Secretary acknowledged that the municipal police could not evict land and peasants’ houses. This means that LNK has arbitrarily carried out this action “, Zubaidah said in a press statement. 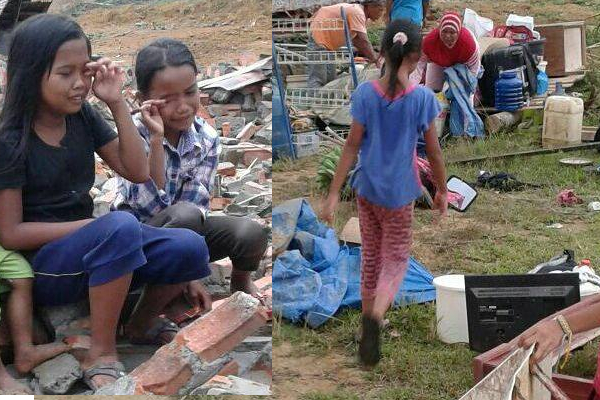 Chairman of the Executive Branch (BPC) of SPI, Langkat Suriono asserted that the land and houses that have been bulldozed are still legally valid.

“Based on the conflict settlement process and the RDP report to the Presidential Staff Office (KSP), the Ministry of Agricultural, and others, there has been no decision on the status of land and houses owned by peasants. This means that no one can carry out any activities on the land, including eviction and destruction of the homes ” said Suriono.

Suriono also urged LNK to respect the laws and instructions of the President Jokowi about the implementation of agrarian reform rather than straddling the law and obstructing the agrarian reform by destroying the lives and livelihoods of small peasants.

“National Land Agency (BPN) or Agricultural Ministry itself has not decide on the conflict, why LNK boldly straddles the law in this country? Are they not satisfied with eliminating our source of livelihood, that they are now bulldozing our homes and evicting us from our land? ” he asked.