Uniterre is calling European peasants to demonstrate against the WTO, which headquarters are in Geneva, on Saturday 9th December. This action will launch that of our comrades mobilized in Argentina for the People’s Summit “WTO Out – Building alternatives” which will take place from the 10th to the 13th December during WTO XI Ministerial Conference in Buenos Aires. 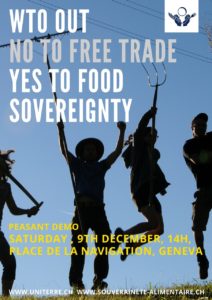 Since January, Switzerland has started free trade negotiations with MERCOSUR (Common Market Latin America). These agreements would have dramatic consequences for indigenous food production. For the Swiss government all means are good to move forward its deregulation agenda. Doing so, he despises his own statements and refuses to take into account the popular will, which has been expressed with an overwhelming majority for food security.

But resistance is growing. Everywhere in the world, powerful citizen platforms – bringing together peasants, environmental movements, consumer protection movements and unions – are fighting against free trade and industrialization to finally impose a fair and sustainable market!

Since its inception in 1995, the World Trade Organization has made a commitment to generalize the liberalization of national markets to the detriment of sovereignty. In this context, multinationals use complicit governments to undermine democracy and all the institutional instruments that served to defend lives, territories and food and agricultural ecosystems. It is not only the food system but also all services and public goods that the WTO intends to privatize.

For 20 years, peoples resist attempts to commodify life, starting with the agrifood system. Our struggles have been a major obstacle to the advancement of the WTO.

On December 9, Uniterre and the Swiss Alliance for Food Sovereignty, invite European peasants’ organizations in Geneva, the city that hosts the WTO’s headquarters, between complicit banks, international institutions and multinationals, to hold the banner of food sovereignty. Together, we will denounce the WTO and the governments that use free trade agreements, threatening to destroy our food systems.

We insist that agriculture be not part of any of the WTO negotiations!

FOR FOOD SOVEREIGNTY!
WTO OUT OF AGRICULTURE!
NO TO FREE TRADE AGREEMENTS! NO TO AGREEMENTS ON SERVICES!