Several thousand small-holder farmers from across India held a massive demonstration in New Delhi, from 20-21 November to draw attention to the acute agrarian distress plaguing the countryside and seeking immediate intervention by the Union Government.

For long, farmers movements and civil society organisations in India have been pointing out the problem of mounting debt in rural farm households.

A steady and steep increase in cost of production over the last three decades, near-stagnant farm incomes and increasing cost of rural household expenses, which are exacerbated by crumbling public welfare services and privatisation drives, have resulted in nearly 60% of the farm households trapped in a cycle of debt. Back-to-back droughts and unseasonal rains since 2012 resulting in severe crop losses, a crash in farm prices over the last several seasons have only worsened the crisis.

On a set of 25 crops, the Government of India offer a guaranteed and minimum support price across to the country’s farmers. However, for several years now as social movements have pointed out, this support price is marginally above – in some instances below – the cost of production.

In 2014, while campaigning for general elections, Narendra Modi who is currently the Prime Minister, had publicly promised to procure farm produces at a higher rate, which would be at least 1.5 times the cost of production. Yet, this is far from reality. What is worse is also that farmers are right now forced to sell their produces at levels that are even lower than the minimum support price.

Also read: Why the government’s promise to buy crops at minimum support prices is often hollow

Green revolution and the subsequent opening up of Indian agriculture to the global free market, has exposed the country’s small-farmers to unfair and unequal competition on the world scene. Agricultural policies that are focused on exporting food, rather than promoting local production and distribution has only favoured agribusinesses and severely marginalised the peasants and small-holder farmers. Despite this, global institutions such as the WTO continue to mount pressure on the Indian government to reduce the support price further and to lower the import tariffs!

The consequences have been devastating. Since 1995, at least 300,000 farmers in India have been forced to commit suicide unable to bear their piling debt and harassments from lenders. Government data shows that on an average 2000 farmers are forced to quit agriculture everyday and migrate to cities in search of work in factories and construction sites.

The resurgence of farmers’ movements in India 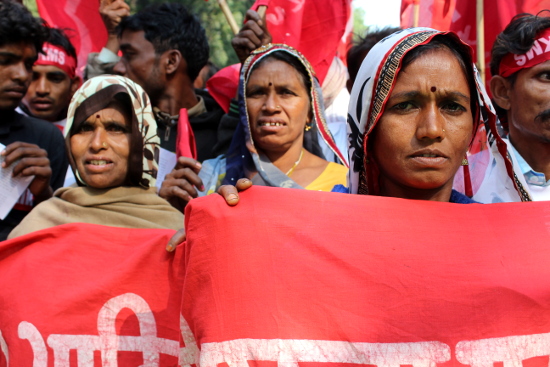 The discontent, which has long been brewing in the countryside is now knocking at the doors of the national capital.

Over 180 farmers’ organisations across India have come together under the banner of All India Kisan Sangharsh Coordination Committee (AIKSCC) to ensure that the farmers present a united resistance against the government’s apathy and ill conceived policies.

India has a rich history of massive farmers’ mobilisations – including those led by Mahendra Singh Tikait of Bhartiya Kisan Union (BKU) and of the ones led by Prof. Nanjundaswamy of Karnataka Rajya Raitha Sangha (KRRS) and several others.

The current crisis in rural India has led to a resurgence of these struggles and organisations from almost all regions of India are in solidarity to stick together and fight until their demands are met. 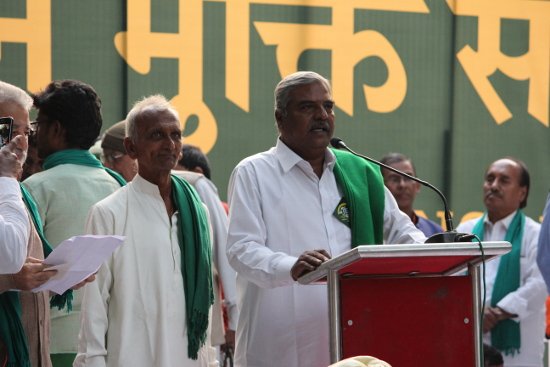 Speaking to a massive gathering of several thousand farmers, Chamarasa Patil, a farmer and senior leader of KRRS thundered,

“We know you have police on your side. We know that the police have guns. We know that those guns have bullets, never hesitating to pierce through the flesh of innocent farmers. But you must know that if the 750 million farmers of this country decide to hit the streets, your bullets wont be enough and your governments will vanish in no time. Do not test our patience”.

Mr. Patil was referring to the recent incidents of state atrocities on protesting farmers in Mandsaur, Madhya Pradesh – which resulted in the shooting and killing of farmers.

During the two days, women and men who were assembled at the site of the mobilisation also held a simulated parliamentary-style discussion, in which they collectively placed their demands in the form of a Bill, which they want the Union Government to take up in the upcoming winter session of the Indian Parliament.

During the mobilisations the protesting farmers, also faxed an invitation to the Prime Minister, inviting him to the street and listen in to their demands and concerns. While it did not elicit any response from the Prime Minister’s office, the organisations have now planned to resume the next leg of the agitation from Gujarat, the home state of the Prime Minister and where state elections are to be held soon.