Home » Peasant agriculture is a true solution to the climate crisis

La Via Campesina call to action for COP21 in Paris 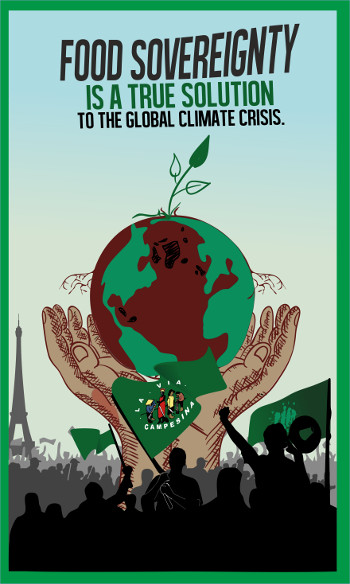 Climate disruptions this year have again caused widespread hunger, migration and the worsening of living conditions for millions of rural families, especially women and youth. While small farmers around the world continue to produce the food most people eat, glaciers are melting at an alarming rate, species of plants and animals are disappearing daily, islands and nations are being reclaimed by oceans, soils are eroding and forests igniting, and catastrophic events such as hurricanes, tornadoes, earthquakes and tsunamis are becoming commonplace. Meanwhile, the global food system imposed on people by Transnational Corporations (TNCs) is both a total failure and one of the main causes of the human-induced climate crisis – dependent on fossil fuels to produce, transform and transport, it is responsible for an estimated 44 to 57% of all global greenhouse emissions1. Instead of nutritious food for the world’s people, TNCs have produced hunger and obesity, land grabs and rural displacement, and a climate crisis they now hope to cash in on with false solutions sold at the United Nations.

Some twenty years since Rio (’92) and Kyoto (’97), governments have met over and over again for their Conference of the Parties (COP) to the UNFCCC (UN Framework Convention on Climate Change). They have continuously failed to protect and advance people’s most fundamental human rights – including the Right to Food – sending delegation upon delegation to climate talks that prioritize private interests over public welfare. Previous agreements and negotiations have moved from compulsory or binding accords to simple pledges that are not even likely to be kept. At the same time, TNCs have secured the political support of co-opted governments to get their interests inserted as bottom-line strategies into the agreements. Carbon markets, so-called “Clean Development Mechanisms” (CDMs), REDD and REDD+, bioenergy and agrofuels, as well as agribusiness’ proposed “climate-smart agriculture” package, are just a few of the misleading proposals now on the table. Instead of solving the problem, these false solutions only serve to worsen them. Instead of capping emissions, they create artificial markets and opportunities for the grossest of polluters to continue polluting and do little to reduce the effects of climate disruptions. By pushing the interests of capitalism and the privatization of nature, TNCs are putting the lives of ordinary people, small-scale farmers, peasants and indigenous communities – who work with nature to secure our livelihoods – into ever greater jeopardy.

When it comes to food, agriculture, and rural livelihoods, peasant agriculture and local food systems have proven themselves capable of feeding people for centuries. According to the UN Environment Programme, the International Fund for Agricultural Development, FAO and the UN Special Rapporteur on the Right to Food, small farmers today still produce up to 80% of the food in non-industrialized countries (where the majority of the world’s people live). That is why we in La Vía Campesina declare once again that Food Sovereignty – based on peasant agroecology, traditional knowledge, selecting, saving and sharing local adoptive seeds, and control over our lands, biodiversity, waters, and territories – is a true, viable, and just solution to a global climate crisis caused largely by TNCs. To implement Food Sovereignty, however, we need far-reaching change. Among other things, we need comprehensive agrarian reforms, public procurement of peasant production, and an end to destructive free trade agreements (FTA’s) promoted by TNCs. In short, we need justice – social, economic, political, and climate justice.

In the run-up to COP21 – scheduled for 30 November to 11 December in Paris, France – promises are being made that a “universal, legally binding agreement” will finally be agreed upon. We in La Vía Campesina, representing some 200 million farmers in over 150 peasant organizations, call on governments to prioritize people’s needs over corporate interests and agree to real climate solutions – including peasant-based food systems that cool the planet – when they meet at COP21. Corporate solutions are false solutions, and will not solve the climate crisis. Our solutions are real solutions, and should be prioritized by the UN. To ensure our voice is heard, we will be mobilized alongside millions of migrants, farmers, workers, women, young people, students, and climate justice activists expected on the streets of Paris.

We call on all social movements, people’s organizations, civil society and activists from all over the world to mobilize in the context of COP21, to come to Paris in great number and also in a decentralized way in order to advance our proposals and show our opposition to the false solutions TNCs have inserted into the UNFCCC. Governments and delegations have dragged their feet for way too long, and must now meet the needs and expectations of the world’s people. Now is the time for true solutions, for Food Sovereignty, and for an end to the corporate capture of the UNFCCC.

FOOD SOVEREIGNTY IS A TRUE SOLUTION TO THE GLOBAL CLIMATE CRISIS

PEASANT AGROECOLOGY FEEDS THE WORLD AND COOLS THE EARTH