Home » Brazil : I am gay. I am lesbian. I am transsexual. I am bisexual; I am Landless. I am human. I am like you

Report from the seminar “The MST and Sexual Diversity”

(Guararema, August 11th of 2015) The MST is organising the seminar “The MST and Sexual Diversity” in the belief that the incorporation of identity struggles is also part of the Movement’s maturing process. 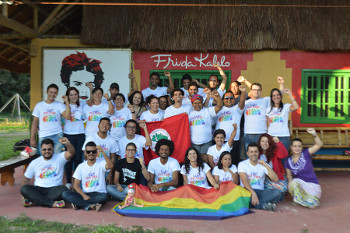 It is not necessary to be lesbian, gay, bisexual, transvestite, transsexual, or heterosexual in order to believe that love is free and pluralistic, that loving is a basic right, and that no one should suffer for wishing to love. It was on the basis of this premise that the seminar “the MST and Sexual Diversity” was held at the Florestan Fernandes National School (ENFF) in Guararema, São Paul on August 7th, 8th, and 9th.

The MST’s first LGBT meeting had more than 40 participants, from several Brazilian states, who believe that the recognition and the incorporation of identity struggles are also part of the Movement’s maturing process.

With the launching of the LGBT discussion within the Movement, a break was made with the public conception of the traditional family that has been accepted as the legitimate model, making it possible to envision a social movement in which sexuality is natural.
As a participant in the seminar, the specialist in psychology at the Pontifical Catholic University of São Paulo (PUC-SP), author and journalist Maria Rita Khel, noted that with every new demographic census carried out in Brazil there is renewed evidence that the family is no longer the same.
But, she asked, the same in comparison with what? Where is the starting point from which we measure the degree of “breakdown” of the contemporary family?“ Even the sentence “the family is no longer the same” indicates a belief that at some point in time the Brazilian family was based on a model that was unconnected to its historical circumstances.

She pointed out that we judge our family life in comparison with an idealised family model, a model that responded to the needs of the emerging bourgeois society of the mid-nineteenth century. “What is certain is that recent demographic studies show a tendency to depart from this model, which the Brazilian middle classes had adopted as an ideal, and which does not generally take account of those who are actually part of it”, she explained.
The seminar “The MST and Sexual Diversity” brought to light an experience of acceptance of differences, of dialogue with the multiformity of social life.

According to Kelli Mafort of the national coordination of the MST, the seminar represents a landmark in the 30-year history of the organisation of the Landless Movement.

“This meeting gives visibility to the LGBT collective as the representative of the struggle in rural areas. It is a fundamental step towards the recognition of their presence among our members and our activists, and within the political leadership of the Movement..What is more, it demonstrates a position of firm opposition to the conservative sector, which encourages racism, homophobia, male chauvinism, and prejudices of all kinds. It is therefore a historic event in the life of the MST; it is a step towards the future, and now there can be no turning back”, she emphasized..

The inclusion of discussions on gender enlarges the area of struggle and paves the way for social demands to be expressed and to gain ground. For the participants, the subject of sexual diversity and the self-organisation of the LGBT Landless Collective only makes sense if it is linked to the Popular Agrarian Reform Project and to the wider struggles for social change and for socialism. 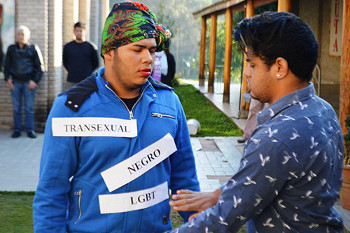 In a certain way, the struggles being waged by the members of the LGBT collective have added new social demands to those traditionally put forward by the Landless Movement.

To a large extent, the sexual diversity movements’ principal demands, which can be expressed in different ways, are related to the quest for social, cultural, and political legitimacy, and to the rights that have been historically denied, such as, for instance, the right of homosexual couples to adopt children;

Opening this debate means recognising the previous absence of reflection within an organisation that fights against social exclusion and that has as a basic principal a collective approach and respect for others.
According to the Bahia Gay Group, which documents cases of murders of members of the LGBT community (lesbian, gay, bisexual, and transgender), on the basis of press reports and information sent by non-governmental organisations, a homosexual is murdered every 28 hours in Brazil.
In the report by the non-governmental organisation Transgender Europe, Brazil also holds a leading place in murders of transsexuals; between January 2008 and April 2013, there were 486 deaths. Recently, a world ranking by the International Association of Lesbians and Gays reported that on a world-wide level 44% of the deaths of LGBT persons occur in Brazil.

“To struggle for sexual freedom is to struggle against the patriarchy”

I am Wagner. I have been in the MST for 16 years. The subject of LGBT has received support within the MST for about ten years. Our great challenge was always to be very present within the Movement, so that we could make a space for subjects related to the LGBT cause.  In São Paulo, I was the first declared homosexual who was a member of the state leadership, which was a great step forward. The openness was incredible; I do not remember having had problems with any sort of discrimination within the state organisation. I believe that sexual orientation should not affect my situation as a member participating in the struggle.  It is important that our symbols and actions unite us. Here the challenge lies in looking beyond the struggle for rights. We should speak of acceptance, the willingness to accept others.

I am Cristiana, a lesbian, and for the past ten years I have been an activist with the Landless Movement for Popular Agrarian Reform. Egalitarian civil marriage was legalised on May 10th, 2010, and Daniela and I were married on May 13th. That is how the search for space within the organisation is played out. The Movement does a lot of work on the subject of the rural family. The time has come when the traditional family must get ready for the existence and the arrival of other kinds of nuclear families. We know that there is still a lot of work to be done inside and outside the Movement. But the law still lacks clarity with respect to diversity in rural areas. Institutions like the ITESP (Land Institute of the State of São Paulo) are not prepared to deal with certain situations.An example: in land ownership titling, it is the woman who has priority, and in the case of a lesbian marriage, there is no legal readiness; it is subjective criteria that are used . Here (in the seminar) our goal is to think of ways of approaching prejudices within the MST and in society as a whole. That is the intention of this first meeting. The idea is not to engage in a flag-waving argument, but rather to do away with barriers so as to incorporate diversity.

“The LGBT collective has the same capacity for struggle, land occupations, and training.” 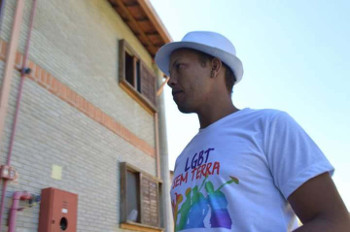 My name is Eduardo (on the left). I am a member of the MST national coordination in Ceará. My work is in the education and training sector, especially with regard to Agrarian Reform. I am gay and a sexual diversity activist. I was registered together with my partner; we are the first LGBT couple in Ceará to be legally recognised by the INCRA (National Institute of Agrarian Reform). Previously, LGBT persons could only be registered as single persons. After 2014, on the basis of the amendment to Ordinance n.° 35 of the Agrarian Development Ministry (MDA), we had the opportunity of signing, and, subsequently, of being registered as a couple. Within the MST the debate on sexual diversity is enmeshed with the class struggle and the conflict with capitalist interests.With this seminar, we are bringing the debate to the very core of oppression, with the understanding that rural workers and peasant farmers have their own particular situation. Both in the Landless Movement and in other rural social movements, there is a certain sense of strangeness with respect to this debate. The MST is not by nature homophobic, as that would be a contradiction in an organisation having as one of its main pillars the construction of a just and egalitarian society based on socialism. However, this premise does not prevent the organisation from having to confront some homophobic practices.There is a huge myth alleging that grassroots peasant farmers and rural workers are not ready to debate subjects related to LGBT. That is a real falsehood used by certain persons in order to prevent discussion. Such opinions are derived from an orthodox lefitst position, an entrenched marxism that promoted, until the middle of the 1980s, the idea that sexual diversity was the expression of bourgeois deviation – that is to say a great misunderstanding. The MST cannot, and is not going to, shun this debate. If we were to do so, we would be left isolated in history. It is a Movement built by men, women, and LGBT. At the same time that we wave the black banner, waging the struggle for Popular Agrarian Reform and against agribusiness, we need to wave the Rainbow Flag, thinking of the countryside as a territory of diversity, and, as such, as a countryside that has to deal with homophobia, lesbophobia, and transphobia – social ills that, like male chauvinism, must be fought against and overcome.