Resolution adopted on June 12, 2013 by VI International Conference of la Via Campesina and proposed by the Japan Family Farmers Movement (Nouminren) delegation to the LVC VI Conference 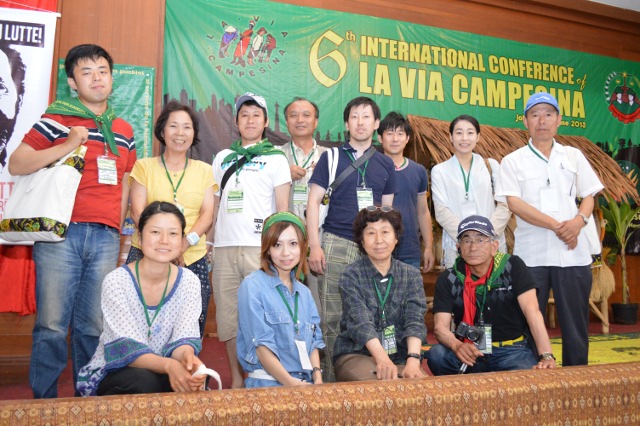 On March 11, 2011 an accident happened at Japan’s nuclear power plant despite the assurance of the government and other pro-nuclear circles stating that nuclear power is absolutely safe.

From the Fukushima nuclear accident, we realized that once an accident at a nuclear power plant occurs and radioactive material is released into the environment, there is no technological means to contain it. The damage spreads geographically without limit and the consequences persist for generations.

The accident particularly affected organic farming which we have developed for a long time and direct marketing movement where the farming products were sold.

In Fukushima, still 150,000 people cannot return home and thus receive relief. It is an urgent issue.

Nevertheless, the Japanese government still refuses to admit it was man-made disaster. The government in December 2011 even announced that the accident was over, without sufficient investigation to determine the cause of the accident and clear process toward decommissioning the nuclear plant.

Although all of the nuclear reactors in Japan stopped operation after the accident, the government forcibly put two of the reactors back into operation, watching for a chance to restart others. Even worse, it plans to export reactors insisting that “Japan’s reactors are the safest in the world.”

In protest against this move, grass-roots movements to seek breaking with nuclear power and oppose to restarting operation are spreading across the country, and protests are staged every Friday in front of the prime minister’s official residence and other places nationwide.

We demand the government stop the plan to export reactors and resumption of their operation, withdraw its end-of-accident announcement, decommission all reactors, and give full compensation to the victims.

With the conviction that rural areas are full of resources for natural energy, we have set up many small-scale distributed renewable power facilities to ensure that we no longer depend on nuclear power, and are calling on others to join our efforts to establish renewable energy oriented community while challenging the mega power generation controlled by large corporations

We call for the international solidarity to promote transformation from a society dependent on nuclear power to one based on renewable energy while enhancing movement against FTA/TPP.