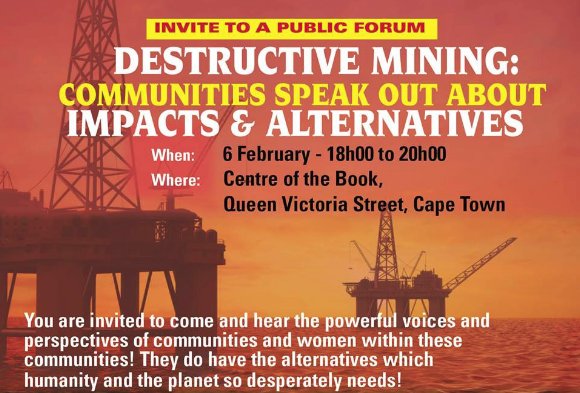 (Cape Town, 5 February 2014) While mining corporations and governments are meeting at the Mining Indaba Summit in Cape Town, South Africa, to talk about more ways to expand the mining industry, ordinary people from Africa and other parts of the world will gather on 4-7 February, to discuss and come together with proposals of sustainable and peoples alternatives to destructive extraction. The Peoples Dialogue a network of southern Africa and South American rural and popular activists and social movements, the Rural Women Assembly and the Campaign to Dismantle Corporate Power will join the 5th Alternative Mining Indaba, together with hundreds of other people. These organizations understand that the extractive corporate model tearing through African countries in the name of economic growth and development is highly destructive.

“In Mozambique we are seeing an onslaught of mining, especially for dirty energy and fossil fuels. At the local level, this is harming communities, displacing them from their territories and grabbing their resources. At the same time, it is damaging ecosystems and contributing to dangerous climate change, which is already causing devastating weather impacts worldwide. The fight against destructive mining is a fight for survival”-stresses Anabela Lemos Director of Justiça Ambiental (Environmental Justice, in Portuguese) in Maputo.

Communities across the region have long defied this destructive development model, from the days of colonialism and they are now challenging new forms of extractivism.

In Cape Town, Peoples Dialogue will host two public events, at the first event the powerful voices and perspectives of communities, ex-mine workers and women from within mining communities will express their concerns and alternatives which humanity and the planet so desperately needs. The second event is on BRICS and their extractive agenda. Indications of BRICS investments particularly in the extractive sector in southern Africa and the rest of Africa are purported to be highly destructive, constituting land and water grabs, abusive labour and community relationships and environmental damages.

On February 6, the public forum, “Destructive Mining: Communities Speak Out about Impacts and Alternatives will take place at the Centre of the Book, Queen Victoria Street from 18h00 to 20h00. Communities affected by mines will speak publicly about what they experience in their day-to-day life with mines and will propose their development alternatives which support local and regional development needs, food sovereignty, low intensity and smaller scale extractives projects with minimal social and environmental impacts. Click for more information on the event.

The second event the BRICS and their Extractive Agenda will take place on the 7 February at the Ritz Hotel from 16h30 to 18h30. Experiences of BRICS corporations will be shared from Brazil, Mozambique and South Africa.

According to Mercia Andrews, from the Peoples Dialogue and Rural Women Assembly, “ it is imperative to discuss alternatives to destructive mining and bring together affected communities and ordinary people to discuss our alternatives. Peasant and working class, particularly women, carry the brunt of mining’s impacts because of their marginal position within their own communities and this must be challenged”.