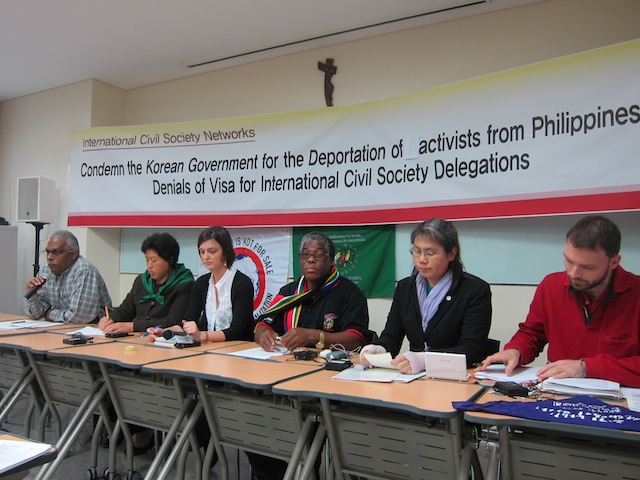 (Seoul, 8 November 2010) International civil society organisations, members of Our World is not for Sale1, trade unions and the international peasant movement La Via Campesina2 condemn the deportation by the Korean government of seven activists from the Philippines3 who had been granted visas. Furthermore, other progressive activists from Asian and African countries were unjustifiably denied visas.

The list of individuals, mostly civil society leaders from developing countries, prohibited from entry, was based not on concrete evidence of actual threat or histories of dangerous acts, but instead on the goal of preventing their participation in civil society events critical of the G20, particularly the International Conference organized by Put People First!-Korean People’s G20 Response Action.

Member of Parliament from Malaysia, Charles Santiago, expressed “While activists, critical to the G20 and neoliberal economic policies have encountered an antagonistic reception by the Korean government, 100 global business executives, gathering for the G20 Business Summit, will be welcomed with a red carpet.”

Deported labour representative from the Philippines Josua Mata added “Nothing demonstrates better the true nature of the G20 than the fact that while it is detaining and deporting activists from the global south, it is busy preparing to have an intimate dialogue with the world’s top corporate leaders. This only confirms what we have been saying all along – the G20 is undemocratic and not interested in improving ordinary people’s lives.”

“The G20 which is a non-elected and non-representative body and excludes majority of developing and poor countries has no legitimacy to be deciding on the economic and political directions of the world.” declared Yoon Geum Soon, representative of the international movement of small farmers La Vía Campesina.

Tyotyo James from the Confederation of South Africa Trade Unions (COSATU) concluded “Since 2008, the G20 has been nothing but a talk show and has failed to deliver any coordinated response to the economic and financial crisis. The future of global economic governance should be discussed, instead, at the United Nations”.

1 The “Our World is not for Sale” (OWINFS) network is a loose grouping of organizations, activists and social movements worldwide fighting the current model of corporate globalization embodied in global trading system. OWINFS is committed to a sustainable, socially just, democratic and accountable multilateral trading system (www.ourworldisnotforsale.org ).

2 La Via Campesina is an international movement of peasants, small- and medium-sized producers, landless, rural women, indigenous people, rural youth and agricultural workers with 148 members from 69 countries from Asia, Africa, Europe, and the Americas. It promotes gender parity and social justice in fair economic relations; the preservation of land, water, seeds and other natural resources; food sovereignty; sustainable agricultural production based on small and medium-sized producers (www.viacampesina.org ).