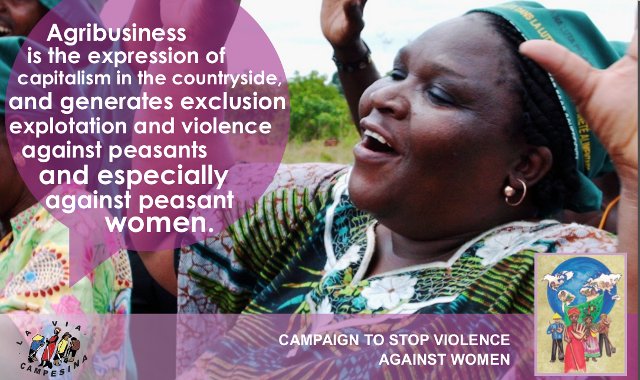 (Harare, November 25, 2013) Throughout these 20 years as La Via Campesina, we have recognized the role of women in all aspects of life. In that sense, we have denounced capitalism and patriarchy as the main generators of all types of violence – physical, ethical, psychological, political and economic – which increase discrimination and violence against women, both young and old.

Rural women worldwide experience class violence inherited from an agrarian structure based on large estates: peasant’s lack of access to land and the means of production and the lack of conditions for remaining on the land due to the destructive power of agribusiness that today is the expression of Capital in the countryside. This economic model is not only responsible for land grabbing and pushing out farmers from their land, but it is also threatening the life of millions of women worldwide through exposing them to pesticides and other poisonous agrochemicals used in the industrial agriculture model.

Inspired in the struggles for land, agrarian reform and food sovereignty, we have discussed gender issues from a class perspective. From this political reflection, we developed and launched the Global Campaign to End Violence Against Women in 2008 as part of our V Conference. And last June, in the VI Conference in Indonesia, we as La Via Campesina ratified the campaign as a reporting tool.

As a movement of peasants, we have stated that our struggles are to build a society based on justice and equality and respect for human rights. Women have the right to a decent life, and in the case of rural women, this dignified life is directly related to access to land and food sovereignty. Studies confirm that women produce 80% of the food, but they own only 2% of the land.

As Via Campesina, we believe that to end this structural violence against women, it is essential to end the capitalist system that is based on class and gender exploitationand the exclusion, mainly, of rural women.

Thus, on November 25th, the women of La Via Campesina call members and ally organizations to prepare International Actions of struggle, resistance and protest for the end of all forms of violence against women.

See the new set of post cards of the campaign : you can print and send them around

More videos about Women on Via Campesina TV.

Publication of the Campaign to stop violence againts Women