Home » India, roundtable on WTO and FTAs brings movements together for regional action 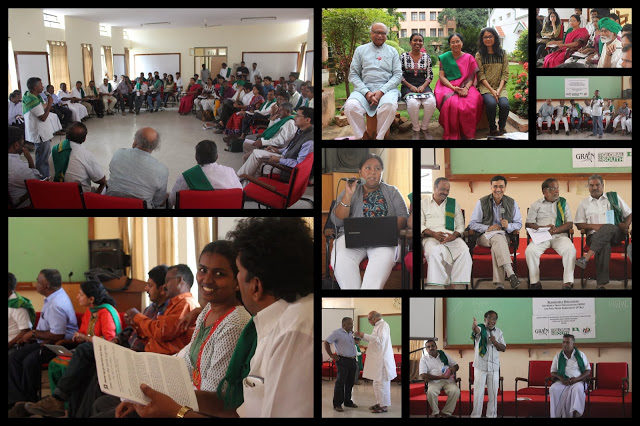 On November 17th and 18th, 2013, leaders of farmers’ movements from four states – Karnataka, Kerala, Maharastra, and Tamil Nadu – came together to strengthen their ties and discuss a topic which has been blasting Indian agriculturalists for 18 years: the World Trade Organization and the resulting onslaught of bilateral and multilateral free-trade agreements.

Starting with an analysis of farmers’ unique context in each state, each movement brought to light a different aspect of the struggle for food sovereignty. Farmers from Kerala situated the farmers’ movement inside a broader struggle for land reform, pointing out that the farmers’ movement must take into consideration landlessness and accompany the Dalit movement in the pursuit of land justice. Friends from Tamil Nadu discussed the unique adversary they face in the Nilgiris — the so-called environmental scientists who are booting tribals off of their own land in the name of conservation and ‘green capitalism.’ They pointed out that each state does indeed share a turf in spite of borders: the biodiverse and highly threatened Western Ghats. Jawandia ji from Maharastra framed the local issues within the global context of free-trade in agriculture and predatory subsidies, putting forward a radical proposal that farm laborers receive the same minimum wage as the government employees. He also brought to the discussion the antodaya in the farmer community – rain-fed farmers – and put out a call to fellow movements to commit to addressing their issues.

The hosting movement, Karnataka Rajya Raitha Sangha, listened to each report with open ears and open mind for future collaboration, and also briefed the visiting movements in recent developments such as a massive mobilization on October 29, 2013 that effectively relaunched the Karnataka State Farmers’ Movement as a unified front. Movements found common ground for moving forward in issues such as a shared watershed/river basin, situations in which imports in one state affect production in another state where imports are banned, and the continued struggle to bring the farmer suicide epidemic to light.

The outcome of the meeting was a strengthened momentum for the South Indian Coordination Committee of Farmers’ Movements, with a renewed commitment to building leadership among women and youth, as well as reaching out beyond the classic farmer constituency to landless laborers, dalits, and adivasis in the fight for food sovereignty. The next meeting will be held in Kerala before the end of January, 2014.

The World Trade Organization and FTAs: A timely and terrifying lesson

SICCFM was honored to receive two guests – Mr. Afsar Jafri from Focus on the Global South and Ms. Kartini Samon from GRAIN – who shared with us an explanation and analysis of the role of the WTO and FTAs in the current agrarian crisis. Mr. Jafri delineated the WTO history and structure, with a special focus on the Agreement on Agriculture and subsidies. In India, the Food Security Ordinance passed this year provides food at an affordable rate to below-poverty-line citizens. However, the so-called “developed” states of the WTO have challenged the subsidy as trade-distorting (nevermind their own gluttonous subsidies, which conveniently fall into a category exempt from inquiry). Jafri advocates that if India must participate in the Bali negotiations, that we do not accept a peace clause but instead argue that the Food Security Ordinance should also fall into the “Green Box.” However, this is not looking likely, and India seems ready to accept a Peace Clause which provides several years of leniency without a real food security plan.

Ms. Kartini spoke chiefly about the dairy sector in India, and the attempts of foreign investors to enter an already self-sufficient market. Right now, most of the dairy sector in India is dominated by “backyard” milk producers,  and industrialists are looking to set up massive dairy production centers with tens of thousands of heads of cattle. This will have a fatal impact on the dairy cooperatives in India and will also be detrimental to food safety.

After being updated on the threat the WTO and FTAs pose to the agriculture sector, especially the small and marginal farmers, SICCFM members reaffirmed our position that the WTO should be shut down. S. Kannaiyan, the convener of the meeting, furiously stated: “The WTO kills peasants and farmers. We must see an end to the WTO before it is too late.” The next ministerial is occurring on December 1-6, 2013 in Bali, and we gave a gave a hearty send-off to the three South Indian farmers who will be representing SICCFM and La Via Campesina at the WTO Ministerial Bali Week of Action. Additionally, they committed to not only taking up these issues through a shared mobilization on the Global Day of Action on December 3, 2013 but also through a village awareness campaign ov