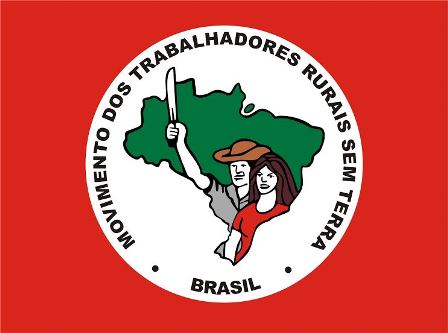 On behalf of MST we thank you for all the messages of support and solidarity for the brutal murder of our comrades Vilmar Bordim and Leomar Bhorbak.

We made a beautiful act in Quedas do Iguaçu (city where they were murdered)  with about 5,000 comrades from all over the country, who occupied the city to protest against the violence, in solidarity with the families of the dead, and for agrarian reform.

In Brasilia we made a vigil in honor of the comrades murdered and demanding the investigation and punishment of the perpetrators.

We live in difficult times and we know that repression and violence may intensify.

Our response will be in the streets, in the land occupations, in the blockade of roads, strengthening our National Day of Struggle for Agrarian Reform and the mobilizations against the coup.

We have a camp set up in Brasilia with 2,000 militants from MST and several other popular movements to monitor the process of the coup in the House and Senate.

April 15, all popular movements of the Brazil Popular Front will hold a big national strike in protest against the impunity of Carajas, the murders of Paraná and against the coup.

On 17 April, the day of the impeachment vote in the Parlament and International Day of  Struggles for Agrarian Reform, there will be demonstrations in every capital of the country and a major mobilization in Brasilia.

So we urge all POPULAR MOVEMENTS AND FRIENDS OF MST TO JOIN US IN THIS PERIOD OF INTENSE STRUGGLES AND ORGANIZE DEMONSTRATIONS IN FRONT OF BRAZILIAN EMBASSIES IN SUPPORT FOR THE DEMONSTRATIONS IN BRAZIL ON THIS DAY APRIL 15: AGAINST THE COUP AND IN DEFENSE OF DEMOCRACY, AGAINST THE VIOLENCE  AND IN PROTEST FOR THE  MURDER OF OUR MST COMRADES

We once again count with the international solidarity of the working class!

In solidarity and struggle