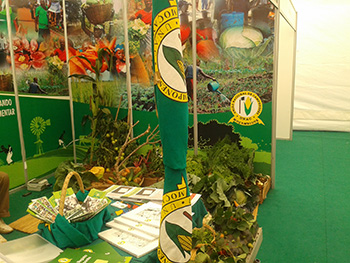 Marracuene, 25 August 2014 – Mozambique’s International Trade Fair (FACIM) started this Monday and will go on for the whole week. It has attracted many local companies and international companies and corporations too, to explore opportunities for new investments and businesses in the country. Besides the overwhelming presence of large-scale economic interests seeking new business opportunities, there are also peasant organisations at FACIM. UNAC (Mozambique’s Peasants’ National Union) and other peasant organisations have ‘stands’ placed at the CEPAGRI pavilion (Centro de Promoção da Agricultura), together with the Ministry of Agriculture and other several groups promoting national agricultural products and livestock, organic crops, as well as agricultural equipment and technology.

UNAC is showcasing at the FACIM the ‘peasant agriculture’. It is taking advantage of the business and investment environment to showcase how peasant agriculture is both economically viable for Mozambique’s agriculture, as well as for the sustainable development on the long run. As Rebeca Mabui, a peasant from the District Union of Manhiça, points out “for us Mozambican peasants, it’s a question of gaining awareness of our potentiality and increase our capacity to produce. It is also an opportunity to share experiences with peasants from other provinces and participants from other countries”.

UNAC’s main goal at FACIM is to show that the peasants are present and that their agriculture – peasant owned and driven – is a sustainable and viable economic path for the agriculture of Mozambique. As Mohammed Obulialia from the União das Cooperativas Agrícolas de Marracuene, argues “without support, forgotten and marginalised, we are still capable of producing and maintaining our agriculture. What we need to show is conservation agriculture, one that uses organic fertilisers and not chemicals”.

At their stand at FACIM, peasants have brought all kinds of vegetables, such as onions, carrots, tomatoes, potatoes, cucumbers, lettuce, cassava, beet, cauliflower, chillies and many other agricultural produce including local seeds, growing strawberry and cassava plants. As Obulialia stresses, “this is not only an exhibition, this came directly from the peasants machambas”. Pedro Jorge Livinga from Marracuene states that the importance of peasants participating in FACIM is the presence of peasants at this kind of event showcasing the viability of peasant agriculture – its produce, diversity and quality. But it is also a way of defending the peasants’ interests in an environment that is slow becoming hostile the peasants.

Mozambique’s President, Armando Guebuza, attended the FACIM on this day and visited UNAC’s stand, where he was offered a basket with all different kind of vegetables cultivated in peasants’ machambas. Guebuza thanked the peasants and remarked ‘there’s nothing missing here’. Together with the President was Maria Vicente, Administrator of Marracuene, who was surprised when she was told “the carrots being showcased were cultivated in the area of Marracuene”. On the existence of markets for their produce, Rebecca Mabui remarked that “There is no support for a local market for these kinds of products, so it is very difficult to sell them”. In response, Maria Vicente promised to send technicians to study the market and explore the opportunities for the products cultivated by the peasants.

This year FACIM has participation of 2,700 exhibitors of which 2,000 are Mozambican and the rest are from other 26 countries.