Home » Mozambique: civil society organizations decided to globalize the ‘No to ProSavana’ campaign and promise to give legal responsibility to ‘perpetrators’ 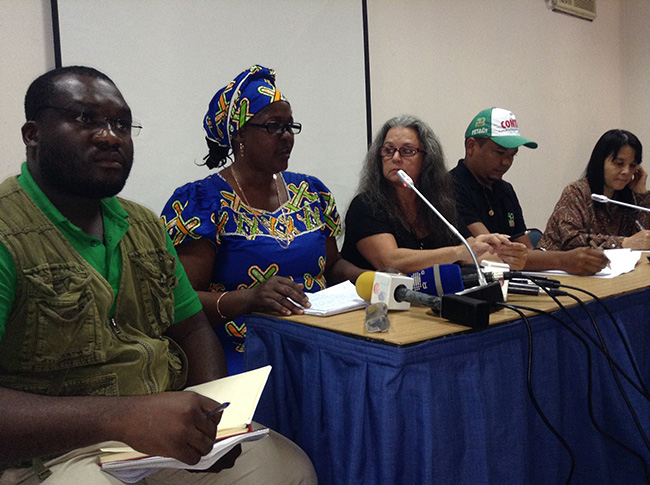 Civil society organizations from Mozambique, Japan and Brazil involved in the ‘No ProSavana campaign’ intend to internationalize this campaign, activate legal mechanisms at national and United Nations level, to give greater responsibility to those operating the ProSavana program, for the damage they might cause to the peasants. This plan of action was revealed during a Press Conference on the second Triangular Conference of the Peoples (from Mozambique, Brazil and Japan), held on July the 24th, in Maputo.

In Brazil and Japan, diverse social movements and the civil society are joining this cause too.

According to these organizations, the lack of response from the concerned governments to an Open Letter written by the civil society organisations to them a year ago has caused them to take this decision. The letter was issued in August 2013 and outlined the complaints from civil society regarding the expropriation of land from the peasants by the companies from Brazilian and Japanese origin under the ProSavana project in Nampula, Zambezia and Niassa.

According to Ana Paula Taucale, vice president of UNAC, the negative consequences of the implementation of ProSavana in Mozambique are already being felt by peasants, in particular, women. In Monapo district alone, part of the Nampula province, about 3,000 hectares of land were taken from the local farmers to produce soybean. In Malema, over 10,000 families were dispossessed of their land, again, to make way for soy production.

“The withdrawal of land from peasants happens without any community consultation as laid down in the Land Law. As peasants our profession is tied to the land where we seek production by family farmers. We want support for developing peasant agriculture and access to markets to sell our agricultural products, “said one peasant woman.

In reality ProSavana is a program that contains many irregularities and does not answer to the needs of the peasants nor of Mozambique, said Vicente Adriano, researcher from UNAC. Vicente said that foreign companies operating in ProSavana have connections with powerful political elites, most of whom are shareholders in these ‘Joint Venture’ companies. Some of these political elites have, in some cases, used threats to grab land from peasants”.

About four thousand hectares of land have been expropriated from peasants to make way for Hoyohoyo and Mosaco companies. When we presented the Open Letter to the Presidents of Mozambique and Brazil, and the Prime Minister of Japan, they did not respond to our compliants and but we were called illiterate”, said Adriano.

In turn, the Vice President of CONTAG in Brazil, William Clementino, stated that Brazil’s strategy will contemplate the pursuit of an active participation of the brazilian civil society in the ‘No to ProSavana’ campain.

ProSavana will not produce food for people to consume, but is producing products to export to the international market, such is the case of soy, cotton and maize. This program will also bring health problems to the local population, due to the agrotoxins used and emitted in the production of these crops. That is the impact seen in Brazil when a similar program was implemented, and up to this date, children are born with health problems.” It is expectedthat the second Triangular Conference of the Peoples, (held on the 24th of July, 2014) brings together about 250 participants, from civil society members to academics, activists, studants, government members, members of the diplomatic corps, among others to discuss and views on how to globalise this campaign.