Home » Milk Crisis: Deregulation not in the interest of producers and consumers 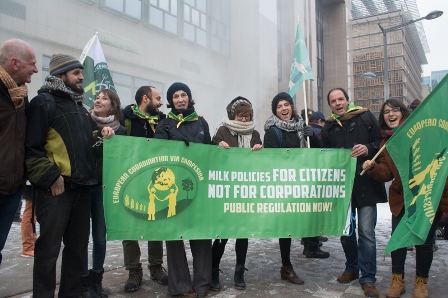 The sector’s deregulatory policy is tailor-made for large-scale distribution and the dairy industry and, it does not serve the interests of producers and consumers.

Today, European milk producers (ECVC and the European Milk Board – EMB) met again in Brussels for a symbolic action on the occasion of the EU Agriculture and Fisheries Council meeting.

The aim of this initiative was to draw attention upon the crisis still affecting the milk sector, to denounce the introduction of powdered milk on the market as a result of public intervention, and to demand the re-establishment of a public regulatory instrument designed to end the crisis, the longest in the sector’s history.

Despite the slight recovery in production prices in recent months, these remain well below production costs while the industry’s stocks are still high.

“As things stand, most dairy farmers will continue to lose money with each kg of sold milk and, although we might achieve profitable production prices in the future, it will be a long time before the sector will recover from the debt and loss of capital caused by the crisis”, said Philippe Duvivier, a producer from the ECVC FUGEA (Belgium) organization.

At the same time, Victor Pereira, of the Confédération Paysanne (France), stated, “It is unacceptable that powdered milk is released onto the market as a result of a crisis management intervention that is aimed at eliminating excess milk from the market “.

“Public intervention is necessary to withdraw milk from the market when there is an imbalance between supply and demand. However, this milk should not be replaced on the market until said balance is restored. This is clearly not the case now, as shown by the failure of the Commission to market 20 000 tonnes of powdered milk of which only 1% was ultimately sold”.

José Gonçalves, from ECVC Coordination Committee, points out that, currently, the Commission has a total stock of powdered milk equalling 360,000 tonnes. However, these figures could be much higher if the ¢21 price triggered by the intervention were to be updated to include actual production costs, as demanded by the sector.

The only positive aspect of the Commission’s attempt to place powdered milk on the market was that the Commission itself was able to experience the difficulties and despair usually felt by the sector when trying to get rid of excess production. This situation –as commented by Stéphanie Delhaye and Henri Lecloux, producers of MAP (Belgium), an ECVC member– results from the suppression of milk quotas, which completely crushes production prices.

With this initiative, ECVC states once again that only the re-establishment of a public instrument that regulates production can stop the destruction of the dairy sector in Europe and safeguard the quality and sustainability of the production model.

Since the abolition of the milk quota system, the sector has faced repeated crises that are increasingly prolonged.

The sector’s deregulatory policy is tailor-made for large-scale distribution and the dairy industry; however, it does not serve the interests of producers and consumers.