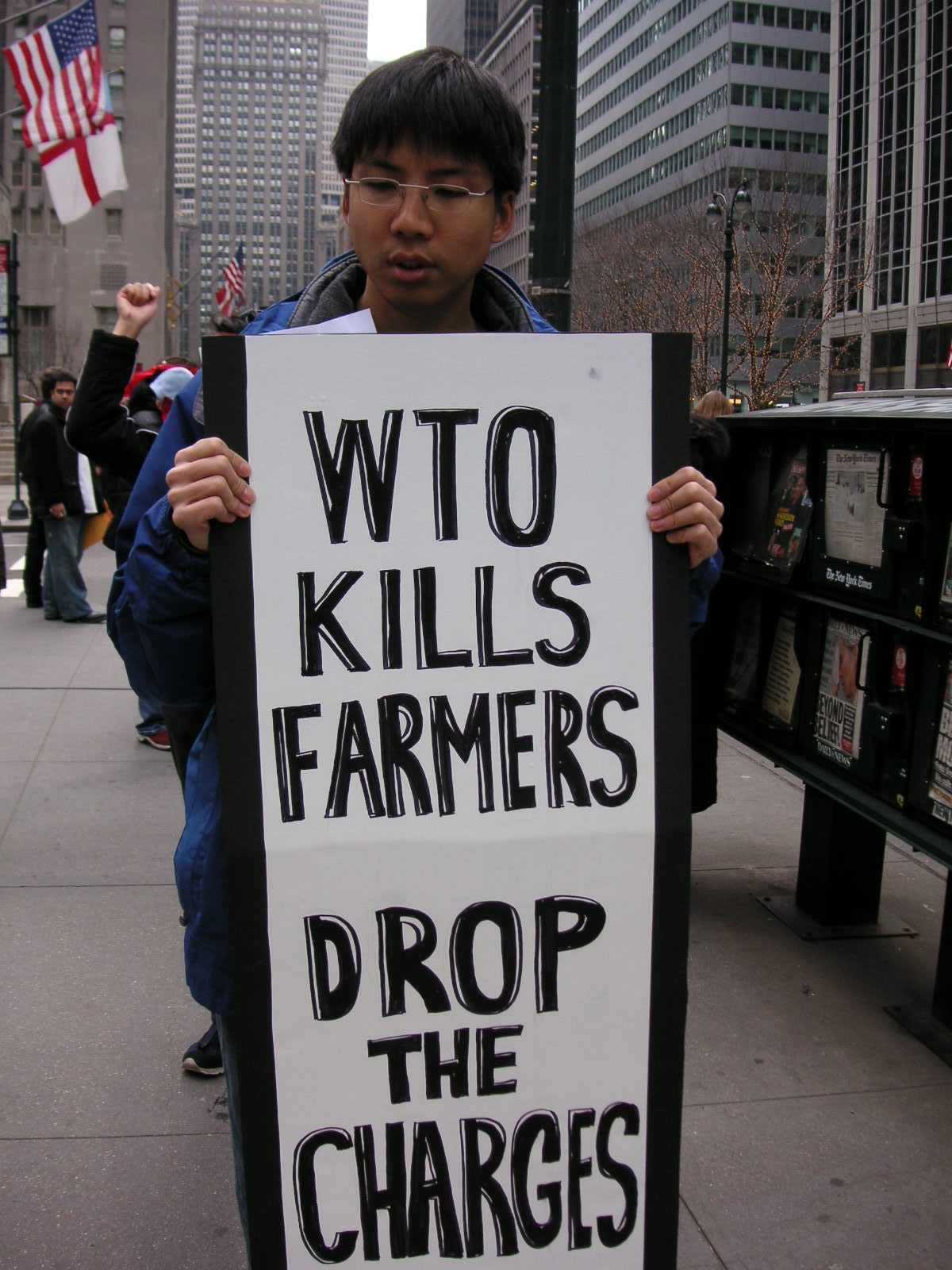 On January 9 and 10, various groups have organised solidarity actions in support of the Hong Kong 14 in the following countries: South Korea, Indonesia, Sri Lanka, Nepal, India, Japan, Philippines, Bangladesh, Spain, Belgium, Germany, USA, Switzerland, Australia, Austria and of course in Hong Kong where 12 protesters have started an hunger strike.
Solidarity messages and petition letters to the Hong Kong authorities are pouring in from all around the world.

Geneva – Representatives from farmer organisations, trade unions and civil society gathered in front of the WTO today to demand the release of WTO protestors. 14 anti-WTO protestors are still facing charges in Hong Kong for events that took place on 17th December at the WTO Ministerial Conference.
12 of the 14 protestors are on hunger strike to highlight the injustice of their case and to protest against the WTO.

José Bové, French farm leader and activist said “the voice of millions of peasants all around the world was not heard during the WTO Ministerial Meeting, leading to a devastating deal for their livelihoods.” He demanded the immediate release of the 14 protestors. “The 14 prisoners are the symbol of our world-wide struggle against the deal reached at the WTO.” José Bové handed a letter to the WTO on behalf of over 100 organisations worldwide, demanding the immediate release of the protestors. José Bové also delivered a message of opposition to the WTO, from the 12 protestors on hunger strike.

José Reynes, a French Film-maker who was detained in Hong Kong during the Ministerial Conference said, “I was protesting peacefully in from of the WTO Meeting with farmers from all around the world against free trade. But we were imprisoned, brutalized and treated as criminals by the Hong Kong authorities.”

Valentina Hemmeler, from the Swiss farmer Union, Uniterre, said “it is times for Chinese authorities to free the protestors and for the WTO to take into account the voice and the rights of people around the world.”

The hearing for the 14 protestors will take place in Hong Kong on Wednesday 11th January.

WTO KILLS PEOPLE!
Solidarity Action in Indonesia for the Immediate Release of the 14 WTO Political Prisoners in Hong Kong

“Release our sisters, release our brothers…
Down! Down! WTO…”
(words from a song by Indonesian folk singer Franky Sahilatua who joined the rally in front of the Chinese Embassy in Jakarta today)

Approximately 200 people from peasants organizations, workers unions, youth, students, and fisher folks and other organisations joined the action today in front of the Chinese Embassy in Mega Kuningan, Jakarta.

Achmad Yakub from FSPI gave the opening speech expressing the solidarity of Indonesian people for people’s struggle against WTO, and asking for freedom of speech, which was turned down in the process of anti-WTO demonstration in Hong Kong Ministerial Meeting.

“As civil society organisations in Indonesia, we would like to point out that a failure by the Hong Kong government to properly investigate and rectify human rights violations during the WTO protests would have a serious impact on the human rights records of the the Special Administrative Region of Hong Kong”, He said in front of the gate of Chinese Embassy.

The action was followed by a “mistica”, a symbolic action. People hold together a very big Indonesian flag, and chanted the hymn of WTO: “money, money, and money, dollar, dollar, and dollar, project, project, and project”. People also called the Chinese Government and the staff of the Embassy if they to come and join the rally to give us their position. But in the end none of them came out.

The action continued with some people giving testimonials about what happened in Hong Kong, and the crowd responded with singing and chanting. “We will continue the struggle for our rights, and it can not be stopped by the government, neoliberalist, or even WTO. WTO Kills People!” said Wira, a peasant from Banten. The peasants in Indonesia are proud because this rally is a part of international action all around the globe (Hong Kong, USA, Brazil, Spain, Bangladesh, Nepal, India, and many other countries). The action ended peacefully around 14:00 Jakarta time.

This letter was signed by 103 People’s organizations from different parts of the country. These included the fisheries sector, farmers, women, trade unions and plantation workers. There had been wide spread campaigns in Sri Lanka prior to the WTO Ministerial which included a ten days People’s Caravan for Justice and Sovereignty that covered most parts of the country. The campaigners demanded the immediate release of the 14 political prisoners who were to be tried in courts charged with “Unlawful Assembly”. The Chinese Embassy refused to accept the letter.

The protestors explained to the media the undemocratic manner in which the Chinese Authorities acted. They also stated that they would continue their campaign in solidarity with thousands of others who are demanding justice on a matter of crucial importance. What is at stake is the right of millions of people to express their voice against the destruction process of the WTO attempting to impose the wishes of the powerful group of TNCs. The Struggle Will Continue. Regards Sarath Fernando (MONLAR) Herman Kumara (NAFSO) Padma Pushpakanthi (Savistri Women’s Network) Linus Jayathilake (Trade Union Centre for the Right to Rebuild the Nation) Australia must push China to release WTO activists

AID/WATCH today joined the international call to action to ensure the release of 14 protesters detained for almost a month after opposing the World Trade Organisation ongoing negotiations on December 17 2005. Australian supporters will protest outside the Chinese embassy in Sydney, 39 Dunblaine St., Camperdown, at 1pm on the 9th January.

The 14 protestors from South Korea, Japan, Taiwan and mainland China are facing charges of unlawful assembly’ for their protest near the vicinity of the 6th World Trade Organization Ministerial Conference site in Hong Kong.

The 14 protestors charged remain on bail but are unable to depart Hong Kong from the more than 1,300 people arrested on the night of December 17. The protesters were attempting to voice their frustration and desperation at yet another round of the WTO Ministerial conference that yielded no measures to alleviate poverty or to address their concerns.

Although all 14 are released on bail, it is our understanding that the Hong Kong government has formally charged them with “unlawful assembly” and they are considering adding new charges.

Australia, which hosted the Chinese head of state in 2004, has made much of its special relationship with China yet refuses to grasp the nettle of supporting human rights standards in favour of its economic interests.

Tim O’Connor from AID/WATCH stated, “for too long Australia has been complicit in allowing China to get away with human rights abuses. The detaining of these civilians is a clear opportunity arising from an international forum where Australia was present, where Australia should be pushing for a quick release so the people involved can return to their families.

The excessive use of force by the Hong Kong Police during the night of the 17th, including the indiscriminate use of electric shock batons and the firing of “beanbags pellet” has left many injured – a matter being closely documented by a number of international rapporteurs.

We urge that an impartial and thorough inquiry into the human rights violations and the violence used on the part of the Hong Kong police be pursued.

A failure to properly investigate and rectify human rights violations reflects negatively on the Special Administrative Region of Hong Kong and further blackens the sooty Human Rights record of China.

AID/WATCH will be staging a protest today at 1pm, outside the Chinese Embassy in Sydney, 39 Dunblaine St, Camperdown.

The Korean Struggle Mission had our demonstration (officially called a press conference because no demos are allowed in front of embassies) nearby the Chinese Embassy at 3pm on 10th January. Police had completely blocked off the front part of the embassy and so we had to be around 50 meters away.

We had around 200 people, workers and activists mostly, and leaders from the Women Peasants League, the President of the Korean Struggle Mission, and union leaders. A lot of the leaders are in HK right now.

Several speakers spoke, we had a banner with pictures of human rights abuse, and although we had tried several times to meet with people from the embassy, they basically refused.

The roundup of all the international campaigns and a listup of all the signatories were also reported to the press.

As I write this report, the trial is going on in HK. It seems that the HK authorities are still unable to come up with “sound” legitimate evidence against the 14, and let us hope that they are released today…. and let’s keep up our struggle against the WTO!