The agricultural workers of the El Paso-Ciudad Juarez’ region continue to suffer poverty and neglect despite their valuable contribution to  the economy of the border region.

In 1993, the average annual income for the border agricultural workers was less that 7,000. This was only a third of the Poverty Income Guidelines of the Federal Government. But in the last 15 years, the  salaries in the fields have fallen dramatically.  Today they only earn half of the wages of 1993. 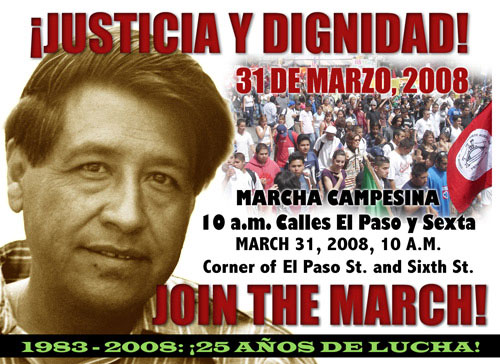 Unemployment affects more than half of the farm labor force. As a result, seven out of ten farm workers don’t have a place to live. The majority lack access to health and medical services and only a few are able to provide a basic education to their children.

Additionally, the border farm workers don’t have the same benefits and legal protections like the rest of the labor force. They don’t have,
for example, the right to organize.

In order to demand justice and dignity we are having a march on Monday March 31, the official state Cesar Chavez holiday. We will gather at 9:30 a.m. at the corner of El Paso and Sixth Streets, near the El Paso del Norte International Bridge.

We invite everybody to join this march and support the struggle for justice and dignity for the border agricultural workers and their families.