Present during the workshop on “Towards a GE-FREE India” Forum, Hydrabad Feb 25, 2008.

By Mrs. Kim, Kyung soon
Former chairperson of local association of KWPA
The member of La Via Campesina 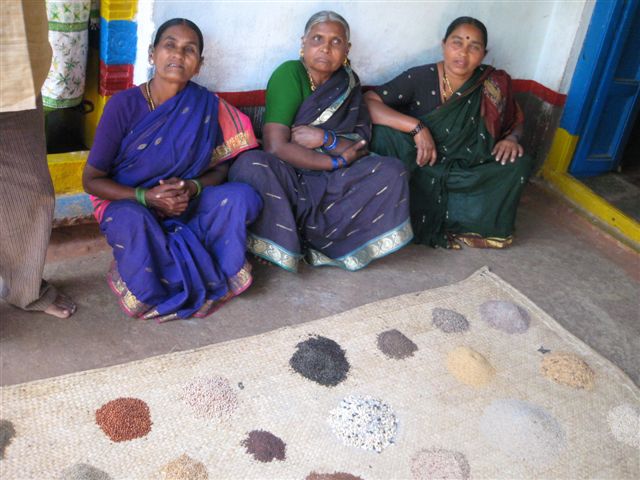 Today the delegation who is here is the women peasants from South Korea, Japan, Indonesia, Philippine, Timor Leste, Cambodia, and Thailand. La Via Campesina is  struggling against GMO. GMO is our main struggle in national and international level. GMO had cause serious problem for farming in our member countries.

With the name of neo-liberalism, the international moving of world capital, products and service etc are increasing and going faster. Neo-liberal globalization is the idealogy which US and transnational companies created to control the world. It is more clear when we see who drive this globalization. TNCs such as Monsanto and developed countries especially US use the international institutions such as WTO, FTA and EPA to promote strongly neo-liberalism. Agriculture is not exclusive from their hand. They also target to agriculture. Originally agriculture is based on natural circulation of organism with internal resources, and then agriculture should not be based on trading or producing to sell and buy with large scale production. Even if that, TNCs inform farmers of GM seed saying they developed the seed which is strongly against pest and guarantee high-productivity so that provide the consumers with low-price food. But how is the reality? Currently world food price keeps going high price and the price of animal feed and fertilizers are continuously going high.

Now I’d like to introduce a lot of problems which the countries in our region have because of GMO.

The cotton Bt introduce in Indonesia since 2001, the testing field in South Sulawesi run by Monsanto with the support by Indonesia government. The testing field cover 500 hectare of land. Monsanto introduce the Cotton Bt to farmer with promised will bring high benefit but in reality all the promise only empty promise. The cotton bt case had been filed class action to the court by the civil society(farmer groups, consumer groups, urban poor and so on) on 2002 but we are lost in the high court.
Until today, the GMO crops believed secretly grow in Indonesia land and Monsanto continue in business without telling the farmer that the seed is GMO seed.

In Japan GMO products aren’t openly grown. But in Ibaraki prefecture, the GMO rice is grown in the field. And Japan is importing GMO food from USA such as soyabean. The NOUMINREN (La Via Campesina in Japan) research laboratory had found the GMO in tofu and animal feed who sell in supermarket. The farmers and consumers are protesting the GMO. Another case found which imported seed of colza transported and the seed fall on the road and contaminated the local seed. These cases are found in many ports in Japan.

GMO introduce in Thailand since 10 years ago, which is on 9 kinds of food stuff. What is crucial is the introduction of GM papaya, which is popular as the local food for papaya salad. Farmer in alliance with the Assembly of the Poor protest on the GMO introduction as this will make the peasant depend on the GMO seed.

Timor Leste as new country becomes the market of the food all over the world since the local market open after the independency seven years ago. The Timor people staple food are cassava, corn, rice, and sago. But most we can find in the market is imported food from foreign country. The meat comes from Australia, and soybean from USA. The GMO product comes from the food aid from foreign countries.

For Korean situation, recently Monsanto introduced GM grass for a golf field at Jeju Island in which developed the organic agriculture in Korea. And then farmers in Jeju island are struggling against it. To more worse, Korea government is pushing FTA with US and try to ratify it within this year. Once Kor-US FTA go through the assembly According to the articles of Kor-US FTA, Korea have to import GM products that fit the US standard without other regulations or testing. That is one of the reasons the farmers oppose the FTA. Korea will face the tremendous GM danger because of Kor-US FTA.

We believe that GMO is not solution for eradication the hunger. Farmers are responsible to feed the people with safe and healthy food. The GMO is introduced by few TNC and support by developed countries. Food sovereignty is the rights of nation to determine our own food policy without any intervention from other country.

This is why we need to mobilize during the G8 summit in Hokkaido, Japan next July. The G8 countries have had summit on deciding the future of the world population. G8 countries produce the neo-liberalism policies and create the hunger, poverty and global warming. As this is time for food sovereignty.