Home » Mali: “Agroecology is in our hands! We are building it further together!” – Opening of the International Agroecology Forum 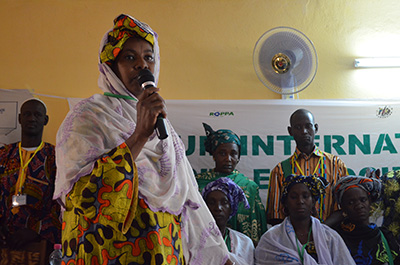 Sélingué, 24 February 2015 – Today, the sun has risen brighter than ever in Mali to warm the more than 250 delegates of the first International Forum on Agroecology being held at the Nyéléni Center in Sélingué, south Mali  hosted by Confederation of Peasants Organizations of Mali (CNOP) and La Via Campesina, and organised by organisations which are part of the International Planning Committee for Food Sovereignty (IPC). There are women and men, from diverse constituencies, among them farmers, fisherfolks, indigenous people, pastoralists and urban consumers from all corners of the world, arrived to the center in buses from Bamako and other regions of Mali (See photos on tvCampesina).

“I decided to come here because we are building a necessary movement, that will claim back what was always ours: our peasant knowledge of doing agriculture “, said a woman farmer from Mali, as she was running to attend the women caucus, this afternoon.

Over the next four days, the women and men of the conference will debate, share experiences and celebrate agroecology with the view to reinforcing a common vision and principles, as well as deciding on a common strategy to claim back the concept of agroecology, “beyond just the scientific aspect, to encompass its social, economic and political elements”, as Gilberto Schneider, from the Movimento dos Pequenos Agricultores (MPA) in Brazil, pointed out.

The Forum opened with a warm welcome to the participants by Ibrahima Coulibaly, the president of the CNOP, who explained the reason why such a forum was taking place now. According to Coulibaly, in spite of agroecology now being mentioned everywhere, it is necessary to question who really are at the center of agroecology. “We are talking about small scale food producers, peasants, fisherfolk, pastoralists, we are who feed the world population. It is we who are the real heroes of the agroecology. It is we that should have a voice”, he said.

Maria Noel, from Movimiento Agroecológico de America Latina y el Caribe (MAELA) in Uruguay, said that agroecology has been practiced for centuries and it represents more than just a system of production. She explained that it was a way of being, a way of life, which respects the environment and provides a livelihood and income to the majority of food producers and fisherfolk on the planet. “We have to make sure that this concept is not captured by corporates”, she said.

In fact, the industrial agriculture system based on heavy use of harsh chemicals, which destroys both soils and forests, depletes resources, and affects the health and wellbeing of both small holders and consumers, is being systematically favoured by governments, which serve the interests of multinationals and enact free trade policies dictated by international financial institutions such as the World Bank and the IMF. As Ibrahima Coulibaly stated: ‘’Humanity went too far, when we thought that we should put the economy before all. This has weakened the world, made it more vulnerable and resulted in climatic change: extreme weather, droughts, and severe water shortages”, he said. 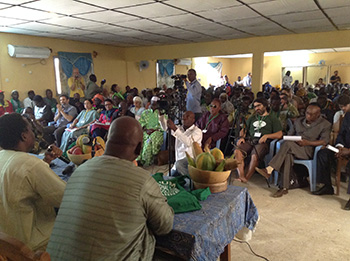 Participants of the first Agroecology forum have a common understanding that the only way to save the planet for future generations is to practice a virtuous agriculture. Thus, people must stand together as one, and this is possible because “we are the majority. If we say no to industrial agriculture, it will be no!”, stressed Coulibaly.

Andrea Ferrante from the Italian Association of Biological Farmers (AIAB) and La Via Campesina reiterated: “we are the answer. The answer to feed the world lies with agroecology. We want a model that is based on our knowledge, our way of living, not on petrol and fake answers from the industrial world. We look at the future of our children”.

The link between rural and urban actors has also being highlighted through a need to connect responsible consumption and production, in strong local and regional food systems based on agroecology.

It is not possible to have food sovereignty, the respect of peoples right to culturally appropriate and healthy food, without agroecology,‘’ said Ferrante.

By Communication team of the International Forum On Agroecology