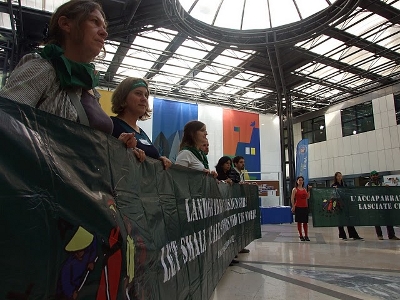 (Rome, 13 October 2010) Today, the problem of land tenure and natural resources was on the agenda of the 36th session of the World Committee on Food security (CFS) of the UN in Rome.

Land-grabbing by private investors and governments has increased massively over the last few years, therefore preventing access to land by current small food producers and future ones as well as imposing non-sustainable forms of agriculture. Through opaque financial structures several European, American and Brazilian banks invest in land-grabbing projects. These investments are contrary to the green image these banks try to project.

It is clear that land-grabbing is an inherent part of the agribusiness model promoted by institutions such as the World Bank, the IMF, IFAD, the FAO or the EU. Creating some vague rules as proposed by the principles of “responsible agriculture investment ” launched by the World Bank will not stop land-grabbing and would even legitimise this huge violation of peasant rights.

As a global peasant movement, La Via Campesina denounces this new form of colonisation that prevents peasants and small-scale farmers from providing food for their communities.

So, if there is a real political will to provide solutions to the food crisis, in which around 1 billion people are suffering from hunger, it is urgent that agricultural policies start supporting small-scale sustainable producers and move away from sustaining an agribusiness model.

In order to find a solution to the problem of hunger, and provide healthy and adequate food to all, access to land is a basic condition. 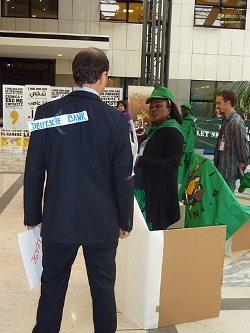 Therefore, as Henry Saragih, International Coordinator of La Via Campesina stated today at the CFS: “La Via Campesina stressed the importance of the International Conference on Agrarian Reform and Rural Development (ICARRD) which was held in Brazil in June, 2006. ICARRD highlighted the importance of higher, secure and sustainable access to land, water and other natural ressources and of agrarian reform for hunger and poverty eradication.”

For us, genuine agrarian reform means that agricultural land be distributed to landless and small-scale farmers, that governments support agroecological and sustainable peasant agricultural models. It also means that governments protect national and local markets from international commodity and financial markets, and that they build national and local buffer stocks of food.”

Therefore, we support the development of guidelines on land tenure and natural ressources that actively involve Civil Society Organisations as now launched by the FAO as a first step. However, we urge governments to go beyond this and implement completely the commitments stated in the ICARRD final declaration.

Food sovereignty can only be achieved through a genuine agrarian reform!

We feed the world!

See testimonies from over the globe about experiences of land-grabbing in several countries that were presented yesterday in the Atrium room of the FAO in Rome.