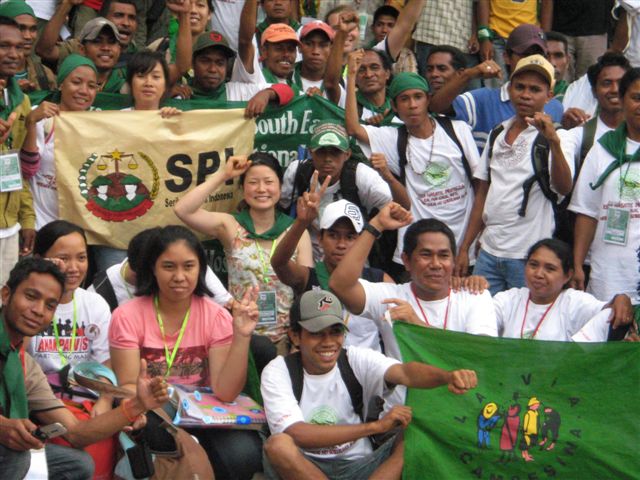 La Via Campesina – South East Asia and East Asia held it’s second youth assembly in Dili, Timor Leste on March 25-29, 2009. Youth leaders from Thailand, Indonesia, Philippine, South Korea, Japan, Australia and Timor Leste shared and discussed the youth situation and the role of youth in the country and our commitment to struggle for food sovereignty.

The youth spent a few days in Timor Leste where they lived and learnt from the community of Uma Kaduak village, district of Manatutu. There we Shared the local food, culture, and planted trees together for their future. 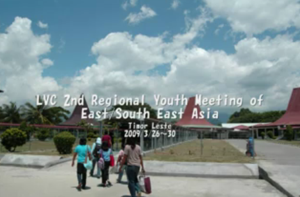 La via campesina youth shared experience of struggle in each country and learnt the worries of Timorese youth, and their current situation. The use of 100.000 ha of fertile land for sugar cane plantation for agrofuel, the promotion of a heavy oil power plant project, the development of hybrid seeds on more than 3000 ha in Maliana district, the distribution of hand tractors to the farmers, the shift from environmentally friendly agriculture into mechanization, migration of the youth from villages to foreign countries to become low wage workers.

Similar problems also occur in other countries. In Australia, farm sizes have become much larger and the number of farmers is decreasing sharply, in Japan young people migrate to the cities in search of work and if they do not find work they become homeless in the cities. The struggle for agrarian reform in Philippine, Thailand and Indonesia increase the peasant rights violation in these countries. Our struggle to defend our rights as peasants is becoming stronger and stronger, we are heading towards the adoption of an international convention on the rights of peasants. The ASEAN human rights body will be our opportunity to introduce peasant rights in the region.

The crisis in the world threatens people mental and physical well-being. Over the past three years, more than 3000 farmers committed suicide in South Korea because of their heavy debt and because cheap imported food is flooding the markets. In Australia an estimated 1, 5 million people under the age of 18 are considered obese. This means that about 20-25% of Australian children are overweight.

WTO and the liberalisation of agriculture had caused the prices of agriculture product drop. This has increased hunger and poverty and as a result million of farmers suffer in many countries. Trade liberalisation and the Economic Partnership Agreements and Free Trade Agreements hit  farmers who are losing their livelihood. Transnational Corporations promote GMO seed and chemical fertilizers, which makes peasants very dependent on buying their products. As a result we also lose our local seeds.   A dam construction in the Mekong river is affecting more than one million people in six countries. The dam is blocking  the river and causing the destruction to the rivers’ ecosystem. Fisher folk are losing their livelihood along the river.

Faced with this harsh reality, the young women and men of la Via Campesina, with strength and passion :