Members of La Via Campesina are participating in mobilizations being held in Geneva as part of the Global Campaign to Dismantle Corporate Power and in the ongoing negotiations of the Open Ended Inter Governmental Working Group (OEIWG), at United Nations, to come up with a Legally Binding Treaty for countries to prosecute and hold to account Transnational Corporations that engage in human rights violations.

This is a historic opportunity to give concrete tools to the affected communities seeking justice for the crimes of transnational corporations. The voluntary guiding principles (UNGPs) have remained a dead letter and were captured by corporate responsibility processes that do not recognize the power imbalances on the ground. The growing and systemic impunity with which TNCs are operating result in attacks on rural communities while companies accumulate benefits and grab land, waters and territories.

On Monday the 24th of October, a delegation comprising members of La Via Campesina denounced the coup government in Brazil, and marked their protest by joined a walkout from the meeting room, with around hundred people , as soon as the Brazilian Ambassador began her intervention.

In the morning of the 25th, two members of the delegation LVC delegates intervened expressing the following messages.

Rogerio Höhn from the Movement of People affected by Dams in Brazil spoke of the rights of people affected by corporate crimes and the need for remedial processes that recognize affected people as actors and as subjects. He also stressed that the Treaty must strengthen the primacy of human rights. He also denounced the violations by the transnational corporation Vale and lack of access to justice for the affected communities one year after the Mariana dam break, as well as the criminalisation of the resisting communities by Vale. 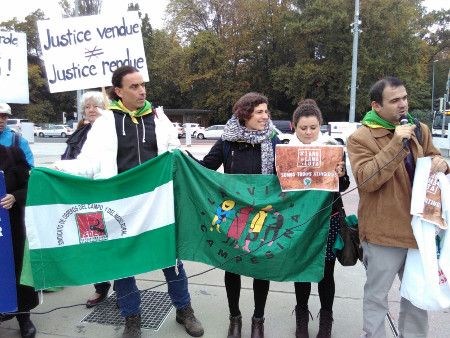 A Caravan of Affected People, will be going from the coast up to Mariana, starting November 2 that will count with the participation of more than 400 people.

Federico Pacheco of the Union of Land Workers of Andalusia intervened to denounce the actions of transnationals pushing a model of industrial agriculture that pollutes the environment, monopolizes and privatizes the commons, and exploits workers and producers. He denounced the political and legal frameworks, such as the FTAs ​​that give primacy to the interests of TNCs rather than human rights of peoples. He encouraged states to move forward with the Binding Treaty to counter this growing power in the agriculture and food sector.

La Via Campesina expresses its disappointment and denouncement of the position of the EU that continues to defend the interests of big corporations against the rights of affected communities, peasants and agricultural workers.

This week the delegation of LVC will participate in several parallel events and actions organized by the Global Campaign to reclaim the sovereignty of peoples, to dismantle corporate power and put an end to impunity in the Tent of civil society at the Plaza of Nations and within the UN:

13 – 15h: Side event (Room XXIII): Arguments in favor of the Treaty: to ensure the full exercise of human rights in Brazil and access to justice for people affected by the actions of transnational corporations

Rally in defense of popular sovereignty at the embassies (morning)

13h – 14h30: Palais des Nations Side Event: Architecture of impunity and the rights of affected communities

Updated information of activities Global Campaign to reclaim the sovereignty of peoples, to dismantle corporate power and end impunity: http://www.stopcorporateimpunity.org/week-peoples-mobilisation-geneva/