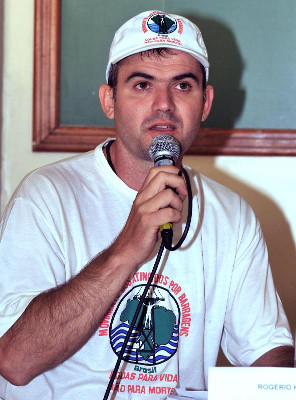 At the ongoing negotiations in Geneva, of the Open Ended Inter Governmental Working Group (OEIWG) at United Nations, to come up with a Legally Binding Treaty for countries to prosecute and hold to account Transnational Corporations that engage in human rights violations, Rogerio Höhn from the Movement of people affected by Dams in Brazil spoke of the rights of people affected by corporate crimes and the need for remedial processes that recognize affected people as actors and as subjects. He also stressed that the Treaty must strengthen the primacy of human rights. Here is the full text of his speech.

The story of those affected by transnational corporations is the story of the constant violation of human rights. It is the story of intensive extraction of natural resources to ensure business for companies, of violence against the affected people and the criminalization of individuals and struggles of social movements. Throughout this process, many fell because they struggled and continue to struggle for the defense of human rights. But at the same time, it is a story of many struggles and conquests that must be recognized.

We come from different parts of the world, we are part of this huge population affected by transnational businesses and, as we noted in our reality, there are no mechanisms of control for companies. And when there are, the structures of the states do not guarantee their application. This leads to impunity of violations committed, and encourages further attacks on defenders of human rights. Companies create their own laws, hijack the structures of states, deny and criminalize those who oppose them. In most countries, especially in the South, there is not even a legislation defining who is affected and what are their rights.

Our history has shown that the struggle of these populations, the resistance against many projects and the struggle for denied rights are the only way for us to be seen and heard. We understand that with these struggles we must strengthen articulations with institutional bodies, national and international ones, to advance with the development of binding rules, of control and which demand the fulfillment of human rights. It is extremely important that the binding Treaty broadly defines the concept of affected people acknowledging the violations and their struggles as the content of human rights. It needs to ensure that those affected have access to justice, so that regardless of their economic conditions, they can achieve the condemnation of human rights violators and due compensation. It should also ensure the setup of class actions and that all processes respect the principles of equal and agile process.

We recall the Mariana dam break involving Vale in Brazil, a year ago, where 22 people linked to the companies of Samarco, Vale and BHP Billiton are pleading not guilty and are trying to escape responsibility, while Vale is aggressively trying to criminalize the communities who are putting up a brave resistance.