Home » La Via Campesina joins the first action of the week of social struggle in Madrid! 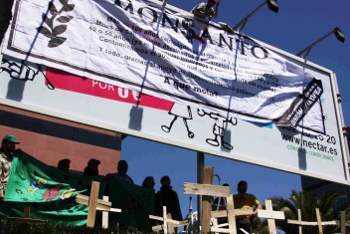 A delegation of Via Campesina took part today in an action organized by a group based in Madrid called “Rompamos el Silencio.”

It is the first in a series of actions this week against the neoliberal domestic and foreign policies  of the European Union, as more than 60 heads of state meet under the Spanish presidency of the EU to sign bilateral trade agreements that favor the entry of multinationals in Latin American markets.

Activists along with members of the delegation hung a banner in front of the offices of Monsanto, planted crosses in front and threw “blood bombs” at the banner.

La Via Campesina denounces again the role of transnational corporations in the destruction and disappearance of peasants around the world, and crimes against humanity and Mother Earth committed by these companies under the protection of European governments.
For a world without transnationals and for people’s food sovereignty!