Interview with Fausto Torres of La Via Campesina Nicaragua 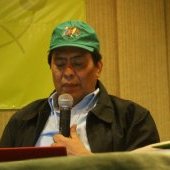 The international organization Via Campesina, which gathers peasants from all over the world, welcomes the consultations called by the United Nations Food and Agriculture Organization (FAO) around the tendency and use of land, to be carried out this week in Brasilia.

The leader of the Rural Workers’ Association of Nicaragua, Fausto Torres, says this is a chance to influence in the international policies on food sovereignty and the production and development models imposed by capitalism through agribusiness.

However, the Central American activist warns that even though the FAO allows for a certain level of influence and exchange between the organizations, the aspirations of the peasant, environmental, indigenous, women and young peoples’ movements should not go unnoticed.

Fausto spoke with Real World Radio at the end of the first day of the event organized by the International Planning Committee for Food Sovereignty (CIP) in the capital of Brazil.

Representatives from more than twenty Latin American countries are in the capital city to address a series of questions that make up the FAO’s guidelines on food sovereignty, the access and use of natural resources.

After three days of debates and exchange, the delegates will attend the call of the international organization with specific proposals. A similar process will take place in 2010 in Africa and Europe.

Rural workers, organized women, peasants and young people, besides the main NGOs working on food sovereignty contribute their viewpoints towards a common and unitary platform.

Fausto told us about the situation of the banana workers, the reality of small coffee producers in Nicaragua and the constant growth of the agriculture border by coffee, sugar cane and fruit transnational corporations.

He believes this chance that ends on May 19, will enable to resume the original spirit of FAO in defense of the local peasants.