Home » La Via Campesina International condemns Marcinho’s murder and demands that the culprits be brought to justice!

January 26, 2018: La Via Campesina strongly condemns the murder of comrade Márcio Matos (Marcinho) leader of the MST in the state of Bahia in Brazil, on January 24, outside his home, in the Boa Sorte camp, in Iramaia falling in the Chapada Diamantina region.

Marcinho, 33, who was a prominent MST leader in the peasant struggle in Bahia, was murdered in front of his son with three gun shots to his head. The death of Marcinho is adding to a long list of peasant leaders and social activists, many of them members of the MST, who have been killed for their tireless struggle to reclaim and take land for the dispossessed families and the landless.

Criminalisation of the peasant movements and social struggles, followed by attacks, arrests and imprisonment including the murder of the peasant leaders and human rights defenders are now widespread. These are part of a violent and repressive policy, which aims to contain the movement for an agrarian and popular reform that can put agriculture at the service of the people instead of turning it into a tool to generate profits for a handful of corporations.

In this backdrop, La Via Campesina strongly condemns the murder of Marcinho and demands that the perpetrators be brought to trial. We urge all members of La Via Campesina to be aware of this call for justice for Marcinho and his family, since the crimes against peasant leaders and social activists are taking place in an environment of impunity and violence promoted by the criminal State.

Finally, we extend to MST – our sister organization, an unconditional solidarity and we place ourselves at your disposal to support your of struggle for justice for Marcinho and his family. That the murder of Marcinho serve to inspire us and to strength our commitment to continue fighting for the rights of the peasants and against this system of death and violence.

For Marcinho, not just a minute of silence but a whole life of struggle! 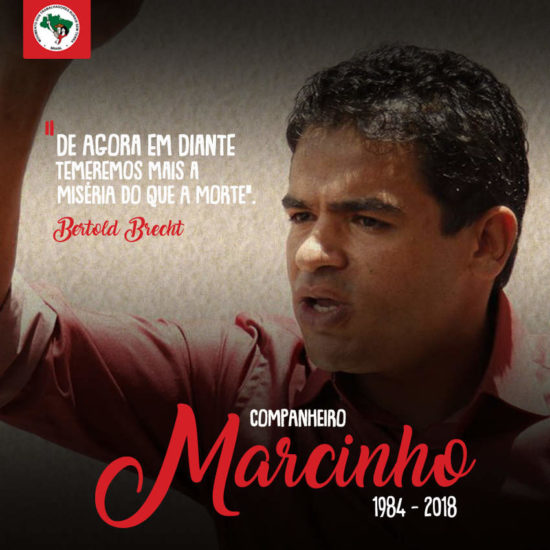