Peasant women from the Asian La Via Campesina movements in The Philippines, Japan, Taiwan, Thailand, Indonesia, South Korea, Nepal and India visited Bangladesh for an exchange visit program organized by Bangladesh Kisani Sabha (BKS) and Bangladesh Krishok Federation (BKF) from the 7-14 Aug 09. The aim of the visit was to empower women at national and regional levels and create public awareness of La Via Campesina’s campaign to stop violence against women – physical, economic, psychological, and social violence. 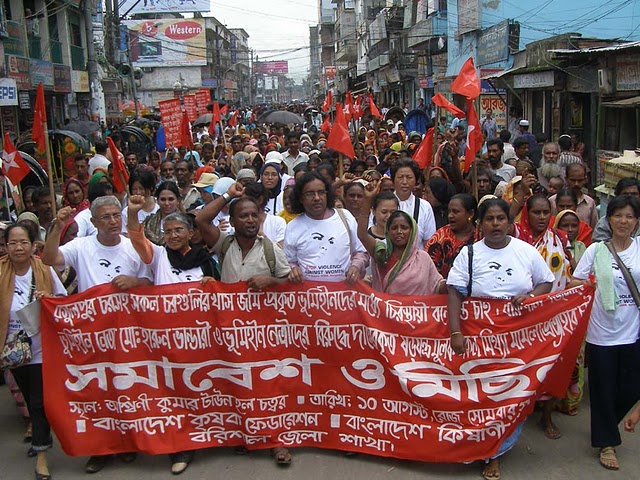 The women learnt and exchanged information about the situation of peasant women and their struggle in Bangladesh and East Asia, South East Asia and South Asia. The participants traveled by boat to the remote southern Patuakhali district of Bangladesh where many landless members of BKS/BKF are engaged in a struggle for land and livelihood and have occupied chaurs [newly emerged islands in rivers]. One third of the land in the south will disappear because of climate change. They are facing serious violence and threats from local large landowners that have illegally been benefiting from the land for personal profit.

The BKS women highlighted the hardships and violence against women in a patriarchal Bangladeshi society. The peasant women from BKS highlighted the problems of the dowry system, polygamy, a lack of access to resources for survival and food and also the absence of healthcare, education, electricity, clean water and cyclone centers in regions that are very prone to violent cyclones.