Home » From villages to New Delhi to Geneva: Indian farmers protest against the WTO

(New Delhi, 8 September 2009) The Indian Coordinating Committee of Farmers’ Movements including groups such as the Bhartiya Kisan Union and Karnataka Rajya Ryota Sanghe, a member of La Via Campesina organised a protest of more than 50,000 people on the 3rd Sep in New Delhi. This happened to be the inauguration date of the informal WTO mini ministerial organized by the Indian government in Delhi. India has been giving out a signal that the Doha round impasse has been broken and that the liberalization and “corporatization” of agriculture under the World Trade Organisation might finally reach a conclusion by 2010. This would put at risk the livelihoods of more than 2/3 of India’s 1 billion people. 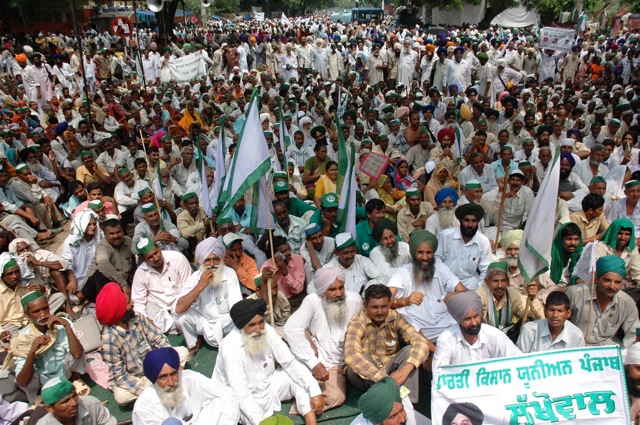 The protesters – women and men peasants arrived by trains, buses and walked from all across the country carrying banners saying “WTO out of agriculture”, to show their opposition to the Indian government’s initiative to revive the WTO. The farmers from the states of Uttar Pradesh, Punjab, Haryana, Madhya Pradesh, Himachal Pradesh, Rajasthan, Maharashtra, Uttranchal and Karnataka were addressed by the farmers leaders from the various states and also by Henry Saragih, a leader of the Indonesia Peasants Union and general coordinator of La Via Campesina. The farmers eventually jumped the police barricades, courted arrest and registered their protest at the Parliament Street Police station. 51,000 of them were arrested for disobeying the police barricade but were quickly released.

India’s Via Campesina farmer’s movements have been carrying out various actions besides the mass protests to fight against the WTO. They first had a meeting with the trade minister Anand Sharma on the 1st of Sep where he promised that India would not betray its farmer’s. However, he did the contrary during the negotiations. They also co organized a national strategy meeting with other constituencies such as the Trade Unions. They also submitted a letter addressed to the Indian government showing their indignation at the fact that the Indian governments sudden and undue haste in concluding the Doha round would essentially threaten the very existence of millions of farmers and laborers by giving priority and control of global agricultural trade to highly subsidized developed country agriculture players. They were also appalled that contrary to its commitment to democracy, the Indian Government has been moving forward with other Free Trade Agreements and the WTO deals under complete secrecy and no efforts for consultations or debates whatsoever. 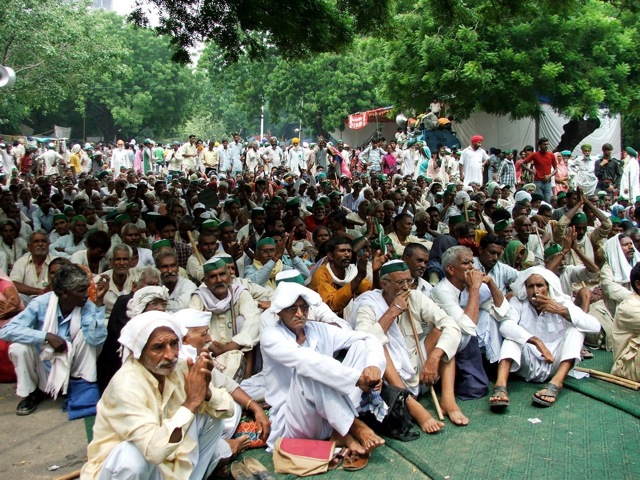 India has been losing more and more ground to developed countries especially the US in the negotiations of the only mechanisms to protect its vital agricultural sector from devastation – ‘Special Products’ (SP) and ‘Special Safeguard Mechanism’ (SSM). For instance, India can only protect eight or nine crops from tariff cuts and only 5% of agriculture products. This is ludicrous for a country which is one the 12 mega diverse regions of the world with an agro- diversity of more than a hundred crops in more than 15 agro-climatic zones and associated human cultures. Furthermore the SSM to prevent import surges have been rendered completely impractical by attaching various ‘terms and conditions’. These apparent protection measures are essentially totally ineffective. Moreover, the US have been pushing for market access on specific crops such as corn, rice, cotton and soya—the crops heavily subsidized and dumped onto world markets and a source of livelihood for millions of farmers and agriculture workers in India.

It is not just a question of the loss of livelihoods, it is also a question of the model of agriculture that is ultimately being promoted in the WTO – the industrially and chemically intensive and environmentally destructive agricultural model owned by large agri-business in the US. India has a rich tradition of farming cultures and crops and these are being undermined at the cost of illogically promoting free trade.

“Minister Sharma promised us in a meeting with farmer leaders on September 1 that he would not undermine the interests of farmers in India at the WTO.  Then he turns around and endorses an agriculture text that allows us to protect only 5% of our agriculture products from any customs duty cuts. Furthermore it has ineffective safeguard mechanisms that will not save our farmers from chronically subsidized products coming from the USA and EU. This is a clear betrayal of the 65 crore farming community that is already devastated by India’s agrarian crisis”, said Yudhvir Singh from the Bharatiya Kisan Union ( BKU) and La Via Campesinas co-cordinator for South Asia. We will intensify our mobilizations at the local, state and national level until Minister Sharma and the Prime Minister live up to their promises of protecting farmer’s livelihoods. 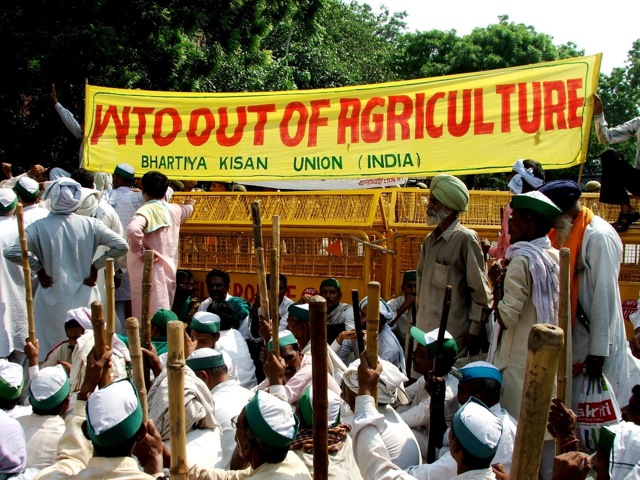 India’s Via Campesina farmers have avowed to fight against the injustice of the WTO system no matter where it goes. They plan to have a chain of mobilizations right up to the village level all across India leading to WTOs Geneva meeting at the end of November. In Geneva, Indian farmers with peasants from all around the world will mobilise within La Via Campesina to defend their vision of an alternative system of agriculture and a world of peace, diversity, justice and dignity. Their fight to keep agriculture out of the WTO is an important step to protect food and the diversity of the majority of the world’s humans, cultures and the environment.