The two-daylong introductory session was attended by 20 peasant women from all over South Korea. The agroecology program at the new school is divided into four learning sessions spread across several months and combining a mix of theoretical and on-field training. The first session, held on the 12th and the 13th of April, explored the peasant way of life and the role of peasant agriculture in advancing food sovereignty.

While speaking to the participants, Kim Soon-ae, Chair of KWPA noted, “Women farmers who are at the forefront of protecting local seeds and food sovereignty should lead the dissemination of agroecology through this program.” Participants, were encouraged to layout and present their objectives of participation and their own ideas of agroecology. 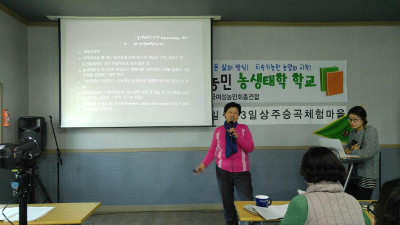 The two-day inaugural session was further divided into five classes; which began with the speech delivered by Yoon Geum-soon, an ICC member of La Via Campesina on “Meaning of Agroecology and Peasants’ Rights”.

It was followed by “Agroecology of Traditional Agriculture” by Kim Seok-gi, researcher and  “Cases of Agroecology in Latin America” by Cho Young-ji, researcher of Nyeoreum, the Institute of Agricultural and Peasant Policies.

The next class “From Eco-friendly, Organic Farming to Organic, Recycling, Ecological Agriculture” was presented by Ahn Chul-hwan, President of Whole Recycling Cooperative, and the one on “Agro-ecology and Permaculture” was conducted by Yim Gyeongsu, director of Saengsaeng Cooperative.

Agroecology is a new perspective raised by peasants. It’s an applied science of the principles of ecology to agriculture and a form of practical research activity conducted by farmers in the field. It also contains the concept and significance that peasants enhance their leading role, taking into accounts interactions in the agricultural system, by recycling natural resources and maximizing the biodiversity.

In a brief group discussion on “Why I want to practice agroecology”, one of the women peasants admitted, “The concept of agroecology is still unfamiliar and difficult to me, but I should start it by all means.”

“Although it is not easy to refuse the logic of corporates and move on to another system in the current agricultural environment that heavily relies on the industrial farming and capital investment, we will try to practice at the local level.”, she added.

The participants were determined to complete the whole program and attend all the remaining three sessions.

“The Women Peasants’ Agroecology School has successfully completed its first session with great classes and participants’ enthusiasm,” said Park Mi-jung, chair of KWPA Food Sovereignty Committee. “The 2nd, 3rd and 4th sessions will be all held at local fields in June through to November, making it a well-mixed education of local examples and theories.”

“The school will be a space of sharing women peasants’ field cases and experiences of ongoing practices.”, she added.

Park also added a call for “more attention to the activities of women peasants who take the lead in the practice of agroecology.”

After the classes got over, the participants visited the opening event of “Thursday Market” that takes place on Thursdays in the downtown of Sangju, and observed the case where women peasants, as a leading body, run a local farmers market and took part in the celebrations.

The is a translation of the original article by Shin Jiy-eon first appeared on KPL NEWS.