Home » Kick Out Lamy Back Home and Burried WTO 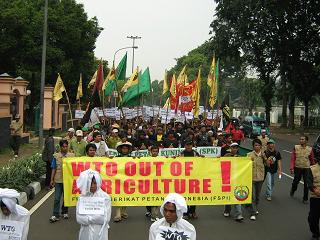 Mass of action dominated by Via Campesina farmers, member of Federation of Indonesia Peasant Union (FSPI), hold an action today (20/2) in Jakarta. It is a join action, where some groups from workers, environment, youth, student, and other social movement organizations unite in the Peoples’ Movement against Neo-Imperialism Colonialism (Gerak Lawan).

Almost one thousand Farmers who join the actions today are rice farmer family who come from several regions out of Jakarta. They left their village yesterday, several women peasant also bring their babies, they spent their night on the bus, before arrive in the capital in early morning and start the rally. Farmers are in very much disappointed this week with the government in their decision to handle the crisis of rice.

The price of rice in several provinces of Indonesia since last week has been increasing beyond the ordinary price and poor people could not afford to buy it. Therefore the government conducts market operations to sell lower price of rice in order to stabilize the price.

Unfortunately, the rice distributed is imported from the international market and not bought from the peasant. This make the traders take huge profit, they could buy rice much cheaper from the international market, then sell it in higher price. It does not enough, by March the rice harvest season will fall parallel with the arrival of the second shipment of imported rice, this for sure will drop the price of rice in the farm gate.

The arrival of Director General of WTO, Pascal Lamy to Jakarta to persuade the Indonesians government as leader of G33 to resuming the WTO negotiation also makes the farmer angrier. In their action farmer are yelling, “Kick out Pasca Lamy back home. We do not need WTO!”

The mass of action today makes a long march from the office of Minister of Trade, to Hotel Borobudur—where Lamy is staying, and to Presidential Palace. Henry Saragih, the secretary general of FSPI also the leader of Via Campesina on his speech saying, “Indonesia does not need to import rice from the international market. The government should buy rice from farmers. We are really very angry if the arrival of Pasca Lamy to the Jakarta has made the government to do import of rice. Where is the sovereignty of the Indonesia and where the sovereignty of the peasant? Now we ask the government to just kick out Lamy back home. We do need him here. Let’s bring WTO to its tomb deeply”

Also involve in the rally today are peasants from other two countries; Malaysia and Timor Leste, who will go to Mali, West Africa, today together with the Indonesian delegation to the international conference of Food Sovereignty.