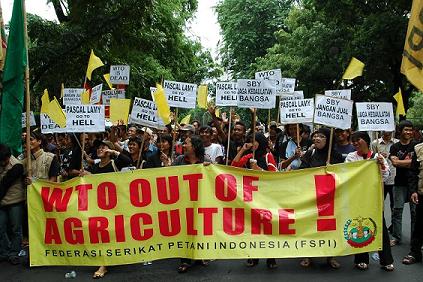 Today passerby and motorists in Jakarta are amaze to see crowds of peoples walking on the main road and waving many yellow flags with their hand. In the capital people hold yellow flags on the road means there is some one who is passed a way, therefore they ask for motorist to slower down their car and motorcycle and to give respect the dead people.

But this morning the way those people holding yellow flags are not as usual, they are not sad, but even they are in happy face. One big truck with loud sound system singing a peasant march’s song lead the peoples with yellow flag. Their direction is not to the grave yard, but to the Borobudur Hotel in the heart of Jakarta.

Yes, this is not an ordinary ritual for a dead people. And this is a special ceremony organized by peasants and ordinary peoples for the dead of a monstrous institution, with the name WTO. They bring it to the Borobudur Hotel, because Pascal Lamy, leader of that institution, wants to give his poison mantra to persuade the Indonesian government to be his next victim.  Before the Indonesian government is persuaded, the peoples want to bury WTO first.

Not like the action yesterday which dominated with man peasants, today action is participated with women. Some bring their babies, and some are old women, who left their kitchen earlier for joining the action. They say,” we do not need WTO. We need the sovereignty of the ordinary people. We want to burry WTO.”

Sumaeri, one of the participants of action, has been in Jakarta since Monday, he left his farm land in the slope of Dieng Plateau in Wonosobo Central Java, on Sunday. He is a militant peasant, on the struggle against WTO in Hong Kong he is one of the leader of Indonesian peasant. He told me, “Without the dead of WTO, peasants in rural won’t have their sovereignty. By only burry WTO, then people in village in all over the world could get their freedom. From 1995 to date WTO kills thousand of peasant. And now, by the collapse of WTO, peasant wants to burry WTO.” (tejo pramono)