Food sovereignty is a feminist issue. Food production, harmonious social relations and balance with nature is the fabric of life that is entwined with and embodied in women. The onset of patriarchy, a structural system of domination more pronounced in capitalist relations, has disrupted balance in social relations. Now, women are exploited for profit. Their economic, social, legal and political rights are not fully recognized, and public policies fail to guarantee their equal social and economic participation. Yet, they are the majority of food producers and continue to do unpaid food-related care work (processing, preparing, storing, seed saving, etc.). Their rights — access to land, support services and legal recognition — receive minimal policy attention and are overlooked by many researchers and experts. 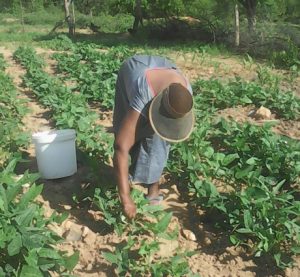 THE CRISIS OF GLOBAL CAPITALISM IS A FEMINIST ISSUE

With the current deepening crisis of global capitalism, peasant women continue to lose their lands, territories and natural resources, and their work, lives and bodies are increasingly being exploited for profit. They are now more vulnerable to prostitution, human trafficking and sexual exploitation as a result of displacement and forced immigration.

Peasant women have, however, not been passive when faced with this economic and social aggression. They have organized to fight and resist, and their actions have manifested in various forms: confrontational and militant, celebratory, restitutive and emancipative, transformative and reassuring. Women in La Via Campesina are part of this struggle. Since 1993, they have been fighting for their rights and against patriarchy and capitalism. They are at the forefront of generating local knowledge, building and shaping social justice, promoting identity and culture, and strengthening the vision of a new society founded on gender relations based on dignity, justice, equality and equity.

The key point that differentiates the struggle of peasant women inside La Via Campesina from other feminist movements is called “Popular Peasant Feminism,” named by Latin American women inside La Via Campesina. Peasant women demand the right to equal participation with peasant men in the struggles to defend rural life and Mother Earth, and to build a different and more just society. They do not want a separate women’s movement; rather, they want to be recognized as central to the larger struggle for a different society, with different relations between women and men, and between humanity and nature.

WHAT IS POPULAR PEASANT FEMINISM?

Peasant feminism differentiates itself from other forms of feminism that are urban-centered, middle-class, and/or from wealthy countries. The Latin Americans say their feminism is “peasant” because it comes from the countryside and not from the city, and “popular” because it is a feminism of the “popular classes” (peasants, family farmers, indigenous people, farmworkers, etc.) and not of the middle and upper classes. They do not want to be separate from men; rather, they want women and men to walk together as equal partners in a larger struggle. They do at times struggle against men – but inside of their movement, not separate from it – to have their leadership and participation be fully recognized. In this struggle, they have won the right to equal representation and participation (gender parity) in all spaces of debate, decision-making, representation and training inside La Via Campesina.

In 2012, women in La Via Campesina prepared a booklet to guide and encourage debate and discussion on the subject of violence against women. Other materials, such as the Rural Women Manifesto, have been prepared to define the struggle of women and strategies for action. The women have ensured that their issues are present in all campaigns, giving more visibility to the violence that rural women suffer, and denouncing and carrying out actions against such violence. 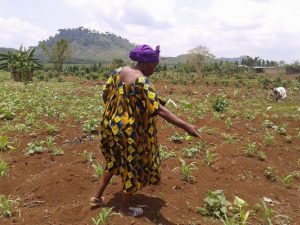 Peasant women have been confronting patriarchy and capitalism through their collective fight for food sovereignty and feminism. Women are key in the struggle to defend peasant land and territory. When land grabbers send police, thugs and private security companies to evict peasants, it is often women who are on the front lines of confrontation. Their bravery in the face of physical violence has won them respect in the peasant struggle. Women have been central to La Via Campesina’s definition of food sovereignty, helping ground it in the production of healthy food for a peasant family’s own consumption. And they have used their voices inside peasant households, communities and organizations to stop the use of dangerous pesticides and to lead the agroecological transformation of peasant family farming.

Women are building resilient agricultural systems based on agroecological farming practices that not only improve food production but that are also in harmony with nature. Through agroecology, women’s rights are protected and realized, and not just as mothers and caregivers in the home. Agroecology implies their full participation in the social and political life of the community, ensuring equal and equitable access to and control over land, water, seeds and other means of production with autonomy and freedom. Horizontal learning as a result of agroecology promotes collectiveness, which improves social integration and cohesion, a key societal foundation. This creates social conditions that erode patriarchal barriers and promote new gender relations.

Agroecology has fostered shared decision-making in households, as it promotes complementary roles for both women and men as they seek to improve their livelihoods and family well-being, thus breaking patriarchal barriers that confine women to domestic roles. Through the co-creation of knowledge, women continue to assert their rights to strengthen their roles. By sharing ideas and knowledge, women gain the capacity to organize and lobby for favorable agricultural policies and to understand how government structures operate.

Women are forging new alliances with other farmers, peasants and progressive researchers to rethink the ways of farming that do not harm the environment and Mother Earth.

PRESERVING BIODIVERSITY: WOMEN IN THE STRUGGLE FOR SEED SOVEREIGNTY

Women are the custodians of seeds and play a big role in keeping cultural eating habits and traditional practices alive. As we face climate change in Africa, Asia and Latin America, women are leading the fight against hunger and poverty through food diversification and sustainable farming. They know the best varieties and their importance to family health, as well as how to preserve heirloom seeds. Women have been brave in the struggles of saving and exchanging seeds, irrespective of national and regional seed laws that criminalize such activities.

Women’s experiences with these crops in their communities and families is a formidable tide that goes against corporate seed industries seeking to control and homogenize our food systems. The corporations want to exploit local indigenous seed knowledge systems and introduce their own hybrid and GMO seeds to the developing world. Based on their experiential knowledge of peasant seeds and their uses, women in La Via Campesina are at the forefront of the struggle to protect seeds, the heritage of their people, for the good of humanity. They hold seed campaigns at all levels in their respective countries and are continuously organizing seed exchanges and participating in conferences and marches, at times being arrested and jailed, or even killed, for speaking out.

Women are at the forefront of preserving the invaluable community-based seed systems, where the bulk of seed diversity is found and evolving. Through La Via Campesina, women are engaging their governments and United Nations bodies, such as the Food and Agriculture Organization (FAO), to recognize the Seed Treaty (International Treaty on Plant Genetic Resources for Food and Agriculture) and the Convention on Biodiversity.

Women successfully transformed the organizational structure and internal functioning of La Via Campesina and have evolved new gender relations over the years. Women in the movement are now able to shape their identities and define their struggles through collective, practical actions to end violence against women everywhere. They have contributed to the feminist struggle and theory with the concept of Popular Peasant Feminism. They have built a universal, broad, democratic movement committed to the defense of peasant agriculture, food sovereignty and the struggle for land, territory, justice, equality and dignity for women and men in the countryside.

Women’s rights to land, inheritance and decision-making have all improved in Africa, Latin America and Asia. Their struggles forge important alliances and build unity within the central struggle against the capitalist and patriarchal system for a new, truly fair society based on equality among men and women. Despite the ideological, political and legislative progress made to date, more work is required. Structural violence against women is on the rise due to worsening global economic and ecological crises. Recent increased criminalization and killings of women pose new obstacles, but they are not stopping the movement. We must all – men and women – work together to achieve a new society based on food sovereignty.