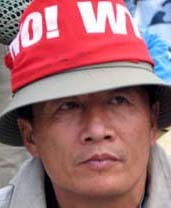 On December 23, the 14 anti-WTO protesters were released on bail. The prosecutor requested 14 days to prepare the prosecution, citing that the police has 61 videos to sort throuh for evidence. The defense has negotiated a shorter preparation period, and the next hearing is set for Friday December 30 at 2:30 pm, Kwun Tong Court. (More information on http://targetwto.revolt.org/node/174)

More than 1000  citizens from different countries were arrested by the Hong Kong authorities on the 17 and 18th of December 2005. They were participating in the massive peaceful march organized by La Via Campesina, an international farmers’movement. The purpose of the march was to express the people’s opposition to the WTO and its damaging impacts on farmers’ and workers’ livelihoods.

La Via Campesina protests against the fact that the police force decided to use unnecessary and excessive force during the march, on December 17. Tear gas was launched  without prior warning to the demonstrators, spectators, and media. Considerable numbers of demonstrators and Hong Kong citizens were injured by water cannons and tear gas.  We express our deepest concern for all injured people.

Reports from the detainees and the legal support group reveal that many have been mishandled or beaten by the police and were denied medical aid, food, water and bathroom facilities. La Via Campesina is outraged by the repression and the violations of human rights during those events and along with other groups we are contemplating filing a complaint against the Hong Kong authorities for violations of human rights.

While most detainees have now been liberated, however the Hong Kong government sent 14 demonstrators to court on the 19th of December charging them with unlawful assembly under the HK Public Order Ordinance. These people include 11 Koreans, 1 Taiwanese, 1 Japanese and 1 mainland Chinese (names listed below). Today on the 23rd  during the Kwun Tong Court hearing all the detainees were released on bail.

We urge the Hong Kong authorities to drop all charges against the 14 released on bail.

We reiterate that your urgent intervention is most necessary, La Via Campesina asks that written confirmation of the steps taken be sent to our address above.

Yours Faithfully
Henry Saragih,
International Coordinator of  La Via Campesina

La Via Campesina is an international peasants movement which coordinates peasant organisations of small and medium-sized producers, agricultural workers, rural women, and indigenous communities from Asia, America, Europe and Africa. It has several millions  members all around the world.

Letters to be sent to: