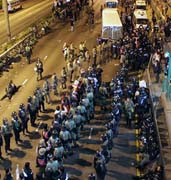 Many anti-WTO protesters belonging to La Via Campesina were arrested during the Hong Kong protests. Along with representatives from  other people’s movement,  they have been very determined to struggle against the WTO because its neoliberal policies destroy small farmers, fisherfolks and workers’ livelihoods. Except for 14 protesters, most of the detainees are back to their home countries now. They are telling their stories. (NEW UPDATES)

From Indonesia
This is the short story about incident happened in 17th night. La Via Campesina’s peaceful and non-violent action turned to be a chaotic one because of the Hong Kong police. The police are in fully responsible for this, and we demand justice for all bad effects and inappropriate things that happened from 17th until now. And for the record, 14 of our friends from La Via Campesina and other groups are still in jail right now in Hong Kong.
When we were arrested, a lot of the treatments were inappropriate. First in the procedure of detainment, which we have not received anything from the police about the reason of the arrests. It was 4 in the morning, and the HK police even did not respect our basic right: the right to have food and eat.

First place: Warehouse
First, all of us (I remember we all are from different countries of La Via Capeskin: Indonesia, Korea, Thailand, Basque, France, Timor Lester, etc) moved to one area called Kuhn Tong (KTOB), which is indeed a warehouse or some kind of place for dog training unit (K9). We just sat there and wait without any food or water. It was very harsh to the Indonesians, because the night before we had not eaten anything. The police did not allow the food brought by our friends to enter Wan Chain district. Our friend tried 3 times in 17th night, but police blocked them all.
And then, the situation became worse because of the cold climate. Some of the Indonesians who can not stand the cold began to collapse. We also could not go to the toilet immediately, and the police made a queue for one-by-one person who can go. We were dragged like criminal by the police. They also prepare a bucket in case people could not hold it anymore.

Second place: Another set-up
When we went to another police station, the police told us that we can get warm place, food and etc. So we moved and obey the police. But the fact it was not true. We were told to sign a detention letter: It was a form where the police had ticked a box. There were 3 boxes: 1 – persons detained in custody of the police, 2- Persons detained in custody of the police on the order of a magistrate, 3- persons under investigation by the police. We just had to sign. It was very confusing and we didn’t know what it meant. We did were not allowed any support from our friends outside or any legal advisor. We could only talk to a translator—who was inefficient and I can say: useless.
This process went very fast. But some of the people of La Via Campesina criticized it. When we started questioning the policemen about the procedure, they wrote it on our file, such as Paul Nicholson, Ikhwan, and other people. We did not know what it meant.

Third place: The lockups
The last and the worst place was the jail. Total of all Indonesian delegation who put in jail is 23 people, including 3 women. We were put in several different jails. We did not know the exact locations, but ours was somewhere in Po Lam district or someplace.

Like most of people said, behind the bar is the coldest place. In fact, it is true. No bed was provided for us, and the treatment was even worse. At least 3 people got sick and no medical attention whatsoever was given to them. They just told us to wait. It was like 5 degrees, and the Indonesians can not stand it from the very first time. They also took all of our protection: hats, scarf’s, and everything outside. The police only provided one thin blanket, and that is all.

Mr. Sawardi Sukirman, who is pretty ill and weak requested to receive medical attention. But until we were released, nothing was done by the police. They were just making promises and saying “wait-wait-wait”. Like the Thai said before, maybe they are so afraid that we would take poison and commit suicide in the jail.

The food is the worst thing on earth. We, the Muslims could not get our decent food. It contained pork which is forbidden for us. The Indonesians got weaker hour by hour in the jail. Fortunately, there were helps from our outside friends. They deliver jackets in order to resist the cold and also new underwear, but the stuffs came pretty late around 4 a.m on the 19th. The police also did not provide us with enough water, so many people got dehydrated, had dried-skin, etc. There was also suspicious thing in the water, which left yellow residue. All the peasants thought it was some kind of sleeping pills to make us quiet.

There were also a lot of shocking things: we could not make telephone calls, there were improper treatments such such as dragging, and physical contacts.
—-
Mohammed Ikhwan – December 23, 2005
Staff of Policy Studies and Campaign
Federasi Serikat Petani Indonesia (FSPI)
http://www.fspi.or.id

From Thailand
Just to give you some more information from the Thai group. From 93 Thai delegates,  the 25 Thai women and 51 Thai men were arrested. We were put in 5 different jails at Mong Kok 26 men, Wong Jai Sin 15 men, Sao Mao Ping 24 women and 1 man, Krung tong 5 men, and Tuen Kwan O 1 woman and 4 men.

In the jail, the policemen treated us like a riot prisoners. The jail is so cold, at least three women got sick and we were rejected to take  medicine as the police were afraid that we would take poison and commit suicide in the jail. We try to explain that the jail was too cold. Since they took all of our socks, scraf and warm things away, we could not stand for that.  However, they did not allow us to take back our warm things. The toilet is open space in front of the cell and everyone can see when you do your private business including the police walking pass by. We could not clean the toilet by ourselves and the pulling thing is only outside the cell and only police can do it.

However, after we were released, all of us are still in good spirit and very much appreciate the Korean friends and Via Campesina to this great solidarity. Some said they will never miss next protest on WTO. We were back home with warm welcome from 70-80 people organizatons alliances. Many television, radio station and newspapers had reported our news many days continuoursly. When the first women group arrived bangkok, we organized the press conference and condemn the Hong Kong police.

Tomorrow our network will go to Chinese embassy to protest against the charge of 14 friends in Hong Kong.

From Bangladesh
In the prison who were the Bengali lady named Salina Akter is my wife.Perhaps, you have herad from Chukki. She was released in the morning on 19th. She told the horrible story that she faced insdie the prison. It is completelty violation of human rights. First she was was kept in a place that was too hot for her to tolarate. While she tried to escape she was dragged to the cell that was too cold and her Sharee was seized forcefully and asked to remain in the cold naketly with only blanket provided by them. When she started bargaining they put threat to bring male police to open her last wears. Salina did not use the blanket protesting their misbehaviour and humiliation. The whole night she was not provided with food. She was jsut freezing. If the consulate would not rescue her in the morning she would have died due to cold. So, the brutality of female police here in HK is another name of abuses.

–      Based on testimonies from members of the Korean Struggle Mission
Due to excessive use of force by the police officers against people engaged in a peaceful assembly people were forced to defend themselves:
a.      Two farmers and one worker were shot with rubber bullets
b.      Numerous people were hit on the head with metal clubs inflicting severe injuries
c.      Numerous people were injured from pepper spray
d.      Officers unnecessarily fired multiple tear gas into the crowd
e.      Officers unnecessarily used electric shockers

The following is a partial list of human rights violation against 600 detainees at the Kwun Tong Police Station 12/17/05-12/18/05.  This list is compiled mostly from complaints made by women detainees only.  We anticipate a longer list of violation from male detainees whom we could not be in touch with.

1.  When arresting participants engaged in a peaceful rally police officers used excessive verbal and physical force to remove them from the crowd on the eve of 12/17 to the morning of 12/18.
a.      One female and one male participants reported that police officers slapped their face when they refused to be handcuffed without a notice.
b.      Police officers did not provide a clear reason why people were being arrested or where they were being transported to.
c.      Numerous detainees reported that the plastic handcuffs they were placed under caused a severe discomfort.  In one case, when one female requested to loosen the handcuffs four (4) police officers rushed toward her to grab her arms and head to escort her away from the crowd.
d.      When a young woman asked a police officer to guarantee her basic rights at the detention center the officer instead threatened them by touching their gun.

4.  The Kwun Tong detention center clearly did not meet people’s basic needs:
a.      When people were first brought to the police station they were detained for up to 3 to 4hours in an open parking lot space to conduct registration.  The weather was very cold and most people did not have adequate clothing to withstand the cold temperature.  There were numerous elderly and sick people who expressed severe discomfort from having to stay out in the cold night.
b.      Police officers placed an excessive number of detainees into very small space cells.  In some cells, people could not lie down or sit with their legs straightened out.
c.      Detainees were forced to remove socks and remain in a cold concrete cell.  Blankets were not provided with until very close to the release from the cell.  Detainees were asked to share a limited number of blankets.  In one cell that contained 6 people only 1 blanket was provided with, and only hours later did they receive more blankets that was barely enough.
d.      There were not adequate toilet paper or sanitary napkins for women. Police officers made derogatory remark and gestures when providing these basic supplies to women.  The same attitude of degradation by police officers were expressed when people requested water and food.
e.      Two out of four female cells in the Kwun Tong detention center had clogged toilets.  One of the cell contained nearly 30 women and they were forced to share one toilet that was clogged.