Home » Karnataka Farmers demand Food and Agriculture out of WTO 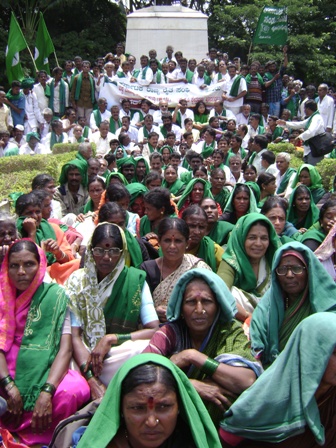 Farmers, Rural Women of Karnataka in solidarity with various farmers organizations of India, resolve that the latest drafts on Agriculture and Non Agricultural Market Access (NAMA) that were released on the 10th of July, 2008 in Geneva, are the final nails on the coffin of the food security and sovereignty of the nation.  Both the drafts are an orchestrated attempt to open up the Indian markets for highly subsidized cheaper imports. Importing food is importing unemployment and poverty that will destroy livelihoods and the country's food self-sufficiency.

Karnataka Farmers are highly concerned about the dilution of Government's position in the WTO negotiations which will play havoc with the lives of us millions. What is being offered to us at WTO by way of special products (SP) and Special Safeguard Measures (SSM) is only a smokescreen and offers no real protection to Indian agriculture and fisheries.  We do not see any efforts by rich countries to remove their agriculture subsidies that depress global prices and insulate their transnational corporations against any market volatility.

The Agreement on Agriculture is designed specifically to ensure that subsidized products from the developed countries are dumped into India. In the absence of quantitative restrictions since 2001, farmers across the country have been exposed to price volatility, decreased incomes and, in many cases, driven thousands of farmers to commit suicides. This is a calculated move to push farmers out of farming and replaced by corporations as has been the approach in the USA and European Union.

In this context and given the above concerns, we demand that the Government should reject the two drafts, as they fail to take India's minimum concerns on-board. Since this has implications on millions of lives and livelihoods of our people, the government should restore import duties to the bound levels and bring back quantitative restrictions. Given the global food crisis, and the extent of agrarian distress in the country, the SP's and SSM's are inadequate to protect livelihoods and food security.

This entire process of negotiations ending up in such one sided deals is a wasted and futile exercise. It is high time the Indian government stands up for its people otherwise the socio, economic and political consequences will be disastrous. Hence, Agriculture and Food should be left out of WTO.

We urge political parties, civil society organizations, academics, etc. to stand up and join hands with us to resist this anti-farmer agreement. We also request our state governments to take up this matter with the Centre on an urgent basis so that the interest of farmers and nation is protected.