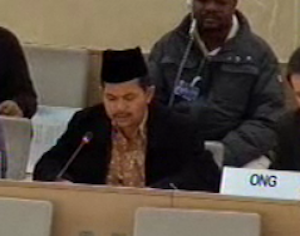 I am reading this statement on behalf of FIAN International, an organization working for the defense of the right to adequate food—and La Via Campesina, a movement I belong to, that brings together millions of peasants, landless people, women farmers, indigenous people and agricultural workers from around the world. We defend small-scale sustainable agriculture as a way of promoting social justice and dignity—and we strongly oppose every form of agriculture that is destroying people and nature.

Not long before the Final Study of the Advisory Committee, a professor at Wageningen University in the Netherlands published an important book called The New Peasantries, in which he states that “there are now more peasants than ever before in history and they still constitute some two-fifths of humanity.”

Nonetheless, increased land grabbing for monoculture plantations, logging, mining and other extractive industries has been destroying our livelihood and environment, making it very difficult for us to farm, to tend our livestock, and to hunt and gather for our daily sustenance. Land grabbing is causing masive violations of our human rights, whilst destroying our land, society, environment and our food sovereignty. Therefore, we urge the international community to cooperate in stopping these violations, which cannot be tackled with the existing human rights instruments.

We would like to congratulate the Advisory Committee for calling attention to the the vulnerable groups: peasants and other people working in rural areas who are victims of discrimination and human rights violations.We also applaud the Advisory Committee for showing how the absence of agrarian reform and rural development policies, including irrigation and seeds, hinders global efforts to overcome hunger and malnutrition. The final study offers the international community tools for tackling the global problem of hunger and malnutrition, and for advancing the rights of peasants and other people working in rural areas.

In conclusion, Madame President, States have nothing to fear. There is much to gain in advancing the rights of peasants and other people working in rural areas and in improving the ability of governments to realize the right to food for all people, especially in times of growing tensions over access to land and other productive and natural resources.

We encourage member states and other parties to support this significant study, and to act boldly in closing existing gaps in the protection of the rights peasants and other people working in rural areas, through creation of a new special procedure, recognition of the right to land in international human rights law, and development and adoption of a new international instrument on the rights of peasants, as concluded in the final study.

I thank you, Madame President

By Mr Henry Saragih, General Coordinator of La Via Campesina