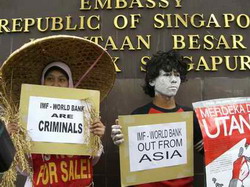 As the September 19-20 Annual Meetings of the World Bank and the IMF in Singapore draw nearer, public protests against the international financial institutions kicked off in Jakarta, Indonesia, on August 28. 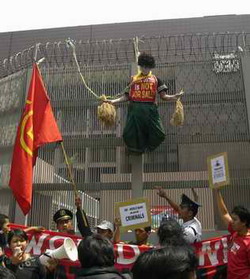 Activists gathered on Monday morning and held a theatrical action, performing scenes of people suffering from debt—symbolized by a man hung at the gate of the Embassy. The protesters asked the Singapore government not to host the World Bank and IMF meetings because they are criminal institutions. However, if the meetings eventually take place, the activists urged the Singapore authorities to open the public space and to allow people to express their views democratically.

“Indonesian debt mounted over US$ 151 billion, and the World Bank and the IMF have contributed to sink our country in what people see as an endless debt” said Achmad Ya’kub from FSPI.

The debt itself is far beyond the government budget for public services.  It is six times higher than the national health budget, twice the education budget, 11 times higher than public housing and facilities budget, and 33 times higher than the social security budget. World Bank projects such as the Land Administration Project (LAP) or the Water Resources Sector Adjustment Loan (WATSAL) caused havoc and suffering to people in the agrarian sector: water privatization and the opening of the land markets to investors have deprived rural communities from their livelihood and have destroyed the environment.

During the meeting in Singapore, Indonesian civil society organizations will continue to struggle against the World Bank and the IMF and will keep fighting for people’s rights and livelihood.