Home » Hungry for Land. Small farmers feed the world- with less than a quarter of all farmland 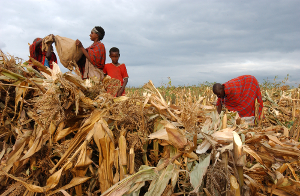 Governments and international agencies frequently boast that small farmers control the largest share of the world’s agricultural land. When the director general of the United Nations Food and Agriculture Organisation inaugurated 2014 as the International Year of Family Farming, he sang the praises of family farmers but didn’t once mention the need for land reform. Instead, he announced that family farms already manage most of the world’s farmland – a whopping 70%, according to his team.

But a new review of the data carried out by GRAIN reveals that the opposite is true. Small farms, which produce most of the world’s food, are currently squeezed onto less than a quarter of the world’s farmland – or less than one fifth if you leave out China and India.

“We are fast losing farms and farmers through the concentration of land into the hands of the rich and powerful,” said Henk Hobbelink, coordinator of GRAIN. “The overwhelming majority of farming families today have less than two hectares to cultivate and that share is shrinking. If we do nothing to reverse this trend, the world will lose its capacity to feed itself.”

Marina Dos Santos of the Coordination of the Brazilian Landless Movement (MST), and of La Via Campesina, states: “Today, the peasantry is criminalised, taken to court and even made to disappear when it comes to the struggle for land. Currently, there are an alarming numbers of deaths that go unpunished. States have created legal concepts such as terrorism and sabotage to intimidate our struggle. Every day we are exposed to the systematic expulsion from our land. This affects not only peasants fighting to stay on the land, but also many other small farmers and indigenous peoples who are the target of greedy foreign interests. We want the land in order to live and to produce, as these are our basic rights against land grabbing corporations who seek only speculation and profit.”

“People need to understand that if the current processes of land concentration continues, then no matter how hard-working, efficient and productive they are, small farmers will simply not be able to carry on,” said GRAIN’s Camila Montecinos. “The concentration of fertile agricultural land in fewer and fewer hands is directly related to the increasing number of people going hungry every day.”

GRAIN’s report also provides new data that show that small farmers still provide most of the world’s food, and that they are often much more productive than large corporate farms. If all of Kenya’s farms matched the output of its small farms, the nation’s agricultural productivity would double. In Central America, it would nearly triple. Women are the major food producers, but their role remains unrecorded and marginalised.

The international agencies keep on reminding us that we need to produce more food to feed the growing population. But how much more food could be produced almost immediately if small farmers had access to more land and could work in a supportive policy environment, rather than under the siege conditions they are facing today?

“The vast majority of farms in Zimbabwe belong to small holders and their average farmsize has increased as a result of the Fast Track Land Reform Programme. Small farmers in the country now produce over 90% of diverse agricultural food crops, while they only provided 60-70% of the national food before land redistribution. More women own land in their own right, which is key to food sovereignty everywhere”, said Elizabeth Mpofu, General coordinator of La Via Campesina.

We need to urgently put land back in the hands of small farmers and make the struggle for genuine and comprehensive agrarian reform central to the fight for better food systems. Something peasant organisations and landless people’s movements have long been fighting for.

GRAIN’s new report, Hungry for land: small farmers feed the world with less than a quarter of all farmland provides an indepth review of the data on farm structures and food production worldwide and comes to the following 6 central conclusions:

The report is accompanied by illustrative maps and a fully-referenced dataset. Available for download at: http://www.grain.org/article/entries/4929

More on the farmers’ struggle for land: “Land is life! La Via Campesina and the Struggle for Land” at: https://viacampesina.org/wp-content/themes/viacampesina/assets/pdf/en/EN-notebook5.pdf